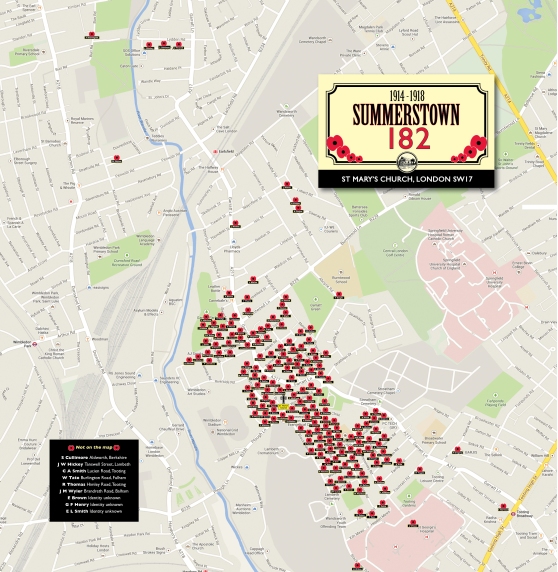 This map is a constant work in progress. It was last updated on 20th November 2016 in the light of our latest discoveries. There are 166 poppies on there. Eleven other men who are on the war memorial lived off the map, some close by in areas like Battersea or Tooting, others much further away. One lived in Bath and another in Berkshire. Some of these may be on the war memorial due to a relative’s connection to the church or they might have lived in the area once but moved away. There are now only three names on the war memorial who we still can’t identify; E Brown, GF Henry and EL Smith. ‘Absent voter’ lists from 1918 have provided a fascinating glimpse of the extent of local involvement in the war and revealed more addresses. They do however indicate how this project is only the tiniest tip of a massive iceberg. For example the list of men serving on Hazelhurst Road has 76 names, only one of whom is one of the Summerstown182. Having examined the lists of the streets within a three quarters of a mile’s radius of St Mary’s Church, roughly between Tooting Broadway and Earlsfield Station, it would appear that 3,175 men from this area were serving in the First World War in 1918. This does not include those under the age of twenty one or any already killed or invalided out of the forces. A truer figure is probably in excess of 5,000. Most of the details have been obtained via the Commonwealth War Graves Commission and their wonderful easy-to-use online database which in many cases provides an address for next-of-kin. Other information has come from census records, electoral rolls and marriage certificates. We cannot be certain that a particular man was resident at a precise address when they died but in the majority of situations it is probably very likely. What we have attempted to do is connect the 182 names on the St Mary’s Church war memorial with this area by establishing a location. In some cases the men had moved away but their parents still lived here and thats why their names are on the memorial – most notably there are four who served with the Australian Infantry and two with the Canadian Infantry. Most of them lived in streets very close to the church, but in those days, just like now, there was a great deal of movement. We are trying to be as accurate as possible, but if we have made any mistakes, we will try and put them right. The St Mary’s parish magazines from 1914 to 1918 have been invaluable in positively identifying a particular soldier, for example ‘AF Brown’ on the War Memorial suddenly becomes ‘Arthur Frederick Brown of the Royal Fusiliers’ and is much easier to find. In many cases, the vicar, Reverend John Robinson also indicated the date of death. Many thanks to Sheila Hill, Dorothy Williams, Marion Gower and Christine Marden who have done so much of the research behind this project. Without their dedication and expertise it would not be possible.