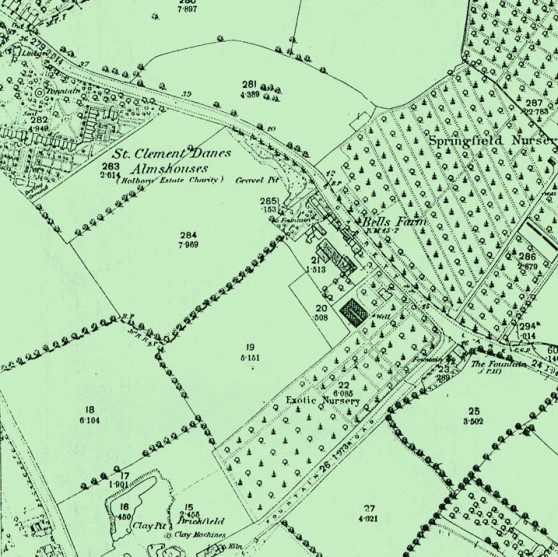 Pevensey Road cuts a swathe through the Fairlight, arrowing down from Smallwood School, directly to St George’s Hospital where it briefly becomes Cranmer Terrace before taking you straight into the Medical School. There is the odd wobble along the way and signs that its taken a few bashes over the years. A couple of months ago I was introduced to George Dear who grew up on the road before the war. As a seven year old he recalled his older brother emerging bleary-eyed from their house early one Sunday morning, to see the tail fin of a V2 rocket just miss one of the turrets of Smallwood School. The blast hurled him across the street and into the gutter as the bomb smashed into the street beyond. Green-fingered George is a daffodil afficionado and a few years ago he extensively researched the work of the reknowned plantsman, Peter Barr. Known as The Daffodil King, this extraordinary scotsman travelled the world in search of new varieties and back in the 1880’s he had a nursery round here at a place called Bell’s Farm, located roughly between the Fountain public house and Diprose Lodge. By 1903, like many of the fields of Summerstown and Earlsfield, Bell’s Farm and its exotic nurseries had been built over and one of the streets springing up in its place was Pevensey Road. Curiously a few weeks ago, Brian Willett reminiscing about his days at Smallwood School, recalled that he still had his LCC daffodil-growing certificate. When the V2 struck, it flattened all the houses on Hazelhurst Road between Nos 14 and 44. Six month old Brian was living at No12. Then a woman who came on a walk told me that she has still got her certificate. Clearly daffs are part of the Summerstown fabric and long may they continue to bloom in our fertile plain. Twenty years before George came along, Pevensey Road was home to the Dell family. Originally living in Southwark, by 1911 they were at No13 Foss Road, right in the middle of the section blown away by the same V2 rocket that tossed George’s brother into the gutter. Albert Arthur Dell Senior was a railway worker and there were six children and what looks like Albert’s brother. In total, nine people in three rooms. His eldest son, also Albert was aged 17 and worked for a printers. William was 14 and a messenger with a bookbinders. 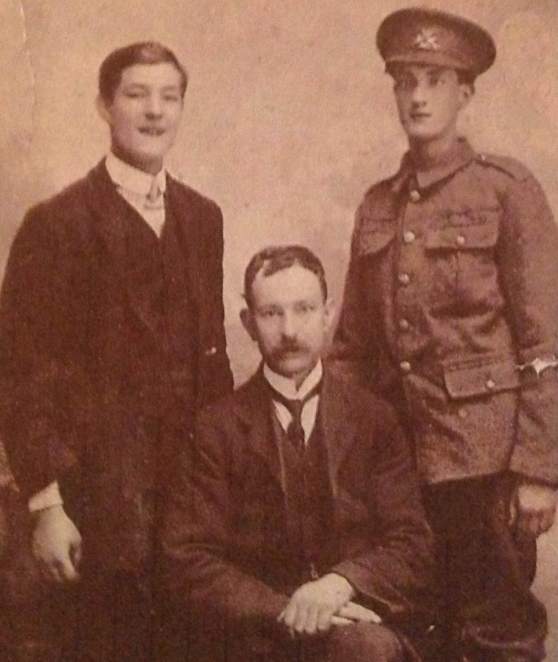 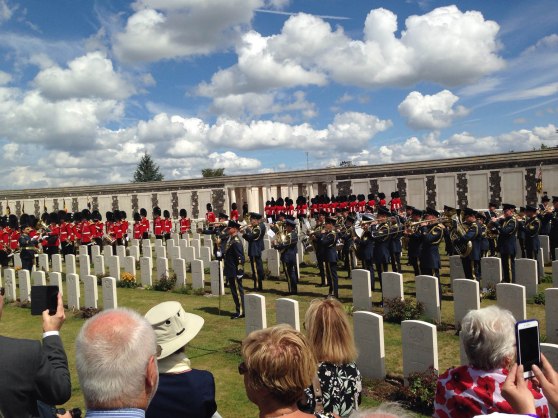 The two brothers were killed within a few months of each other in 1917, the year of stalemate. Aged 23, Albert Arthur Dell died on 11th September 1917. His name is on the immense Tyne Cot memorial just outside Ypres. This memorial bears the names of almost 35,000 men and it is the largest cemetery for Commonwealth forces anywhere in the world. Two other Summerstown182 men are remembered here, Eldred Henden from Wimbledon Road and Joseph Lucas from Bertal Road. Rifleman William Dell aged 20 was killed on the last day of November and is commemorated on the Cambrai Memorial about seventy miles north of Paris. He’s also got Summerstown company there – by the most extraordinary coincidence, Joseph Lucas’ brother Albert was killed on the same day. A third local boy, Eric Tibbenham from Thurso Street is also here, making 30th November 1917 one of the darkest days in the Summerstown182 saga. Albert Dell is pictured on the right of the above photo and William Dell is on the left of the photograph below, both very kindly provided by Liz Yates, a great niece of the Dell brothers. 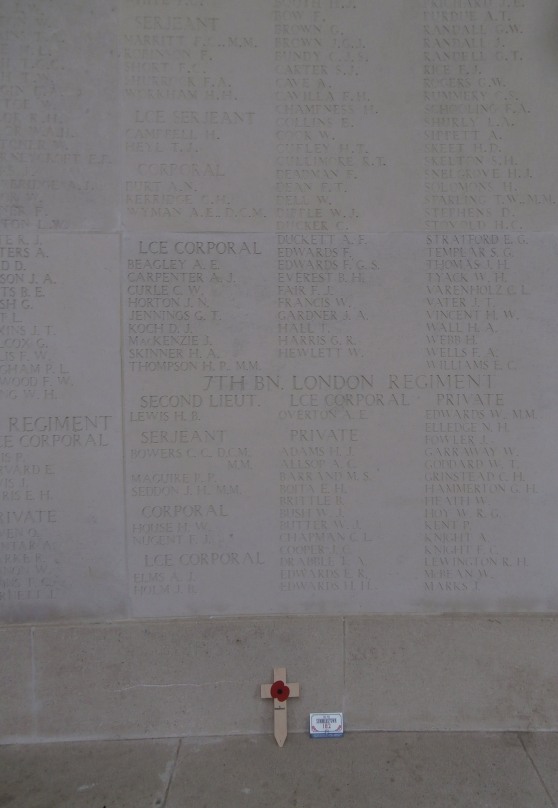 Two Dell brothers, one in Belgium, one in France. Both lost without trace, their parents, Albert and Ada waiting for a year to have some idea what had happened to them. In the same stark paragraph in the December 1918 issue of the St Mary’s parish magazine which announces the loss of Thomas Charles Milton, the Balloon Man, Reverend John Robinson reported ‘Albert Arthur Dell, Machine Guns Corps, has been missing since September 1917; his brother William Frederick Dell, London Regiment has been missing since November 1917.’ In the absent voters list, prepared for the December 1918 General Election, they are both listed. The names would have been collected in the early part of 1918 from next-of-kin and one can only imagine Albert and Ada giving their sons’ names in hope. Not having heard from them since the tumultuous Autumn battles of Passchendaele and Cambrai, they must have feared the worst for their boys.

The family had at this point now moved to 35 Pevensey Road. The house numbers for the street run up to 65 but there are 81 names of serving men on the absent list. Among them are James and Reginald Ackerman at No36, possibly related to the two Ackerman children killed by the bomb at 36 Hazelhurst Road a generation later. A document survives relating to the death of Albert Dell which sums up the agony of his parents. Stamped, 6th January 1921, it is a receipt from Albert’s regiment which was despatched with his memorial scroll and probably also a death plaque. Alongside the royal crest, the wording on it read ‘He whom this scroll commemorates was numbered among those who, at the call of King and Country, left all that was dear to them, endured hardness, faced danger, and finally passed out of the sight of men by the path of duty and self sacrifice, giving up their own lives that others might live in freedom. Let those who come after see to it that his name be not forgotten.’  The person receiving it was supposed to acknowledge receipt and someone who signed themselves ‘A Dell’, either Albert or Ada, has added a few telling comments ‘PS, I regret it is not received with thanks. It is not worth putting a piece of wood around it. I think that those who have fought and fallen are worth as much respect as those who survived.’ 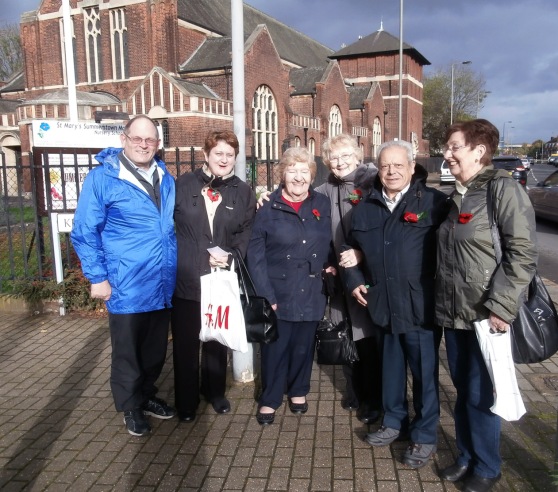 UPDATE (August 2017): In November 2014 a contingent of the Dell family joined us on a memorable Summerstown182 Walk. It was getting dark when we reached our final stopping point, 35 Pevensey Road and as we stood outside the house and quietly reflected, the gate swung gently open. It was one of those moments. Liz and Eileen who provided photographs of their relatives have since become regular correspondents and great supporters of our project. Three generations of the family attended St Mary’s Church Remembrance Sunday service a few years ago and laid wreaths.  They have shared photographs of Albert and William and contributed greatly to our knowledge of the Dell brothers. 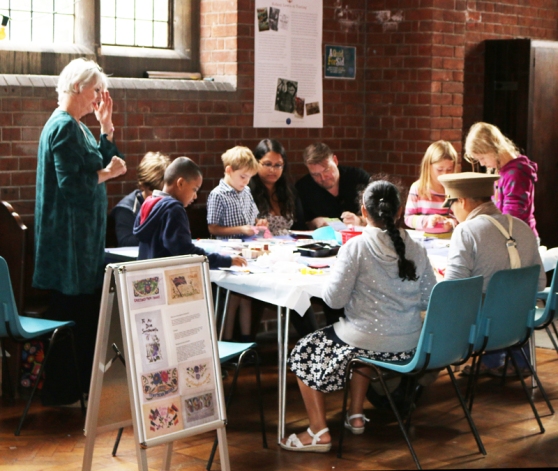 Most memorably Eileen showed us the beautiful collection of embroidered postcards which Albert sent home when he was in France. These inspired us to do a ‘postcard-making’ craft activity at our lottery funding launch event in St Mary’s Church last September. Eileen came along to show people the originals and it was a great success with even ‘Sidney Lewis’ himself getting stuck in! We’ve visited the places where the Dell brothers names are commemorated at Tyne Cot and Cambrai. Albert was on our minds when we were back at Tyne Cot recently for the Passchendaele Centenary Commemoration. We’ve recently had more family contact us from the United States and when they are ready to visit the area we look forward to also giving them a tour.

One thought on “The Daffodil King”