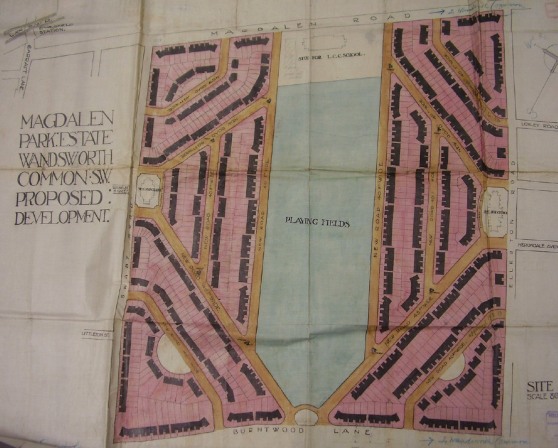 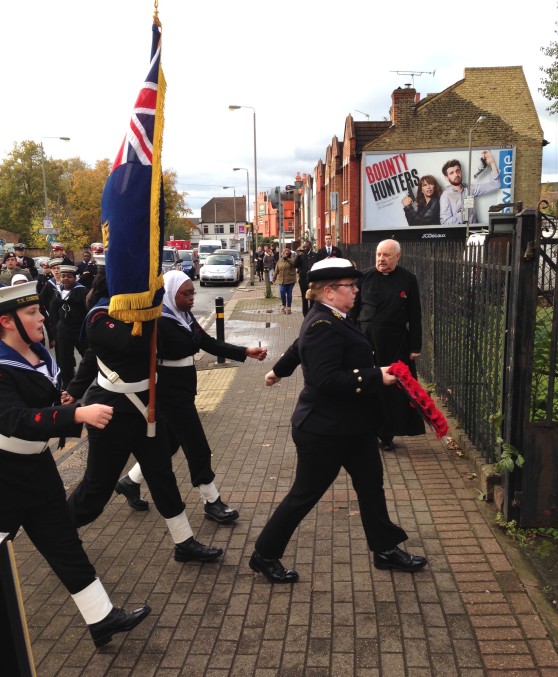 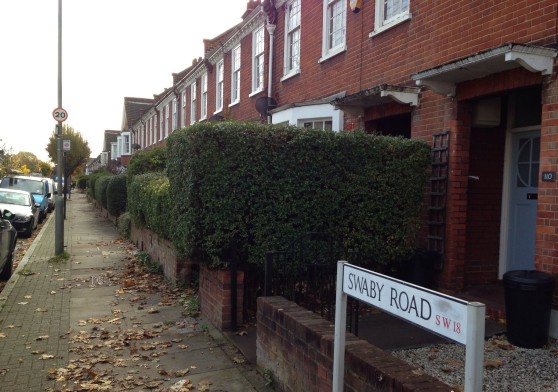 Many years ago when soldiers were at battle in the field with no altars on which to hold religious services, they would pile their drums neatly to make an altar, perhaps draped with regimental colours or a flag. A clergyman would then consecrate the ‘altar’ and celebrate religious services. In modern times the tradition of the Drumhead Service of Remembrance lives on. In the quiet stillness of the dark November night, I always like to slip into St Mary’s Church, Summerstown on the eve of Remembrance Sunday. The drums will have arrived earlier that evening and make a splendid sight, red, black and pristine shiny, they bristle with anticipation, evocative of the eve of battle. They also remind us that amongst the ranks of privates, gunners, sailors and aircraftmen that make up the Summerstown182, there is one who stands alone in being classified as a drummer. Its George Henry Cooper of Huntspill Street and Swaby Road, who was in the 8th Battalion of the East Surrey Regiment. He died aged 27 of pneumonia on 7th May 1918, just under two years after his brother Reginald was lost in the Battle of Jutland. He is buried in Wandsworth Cemetery. 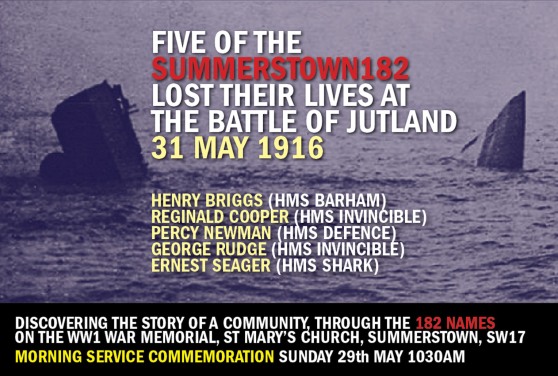 Henry Benjamin Cooper, a baker from West Molesey, near Hampton Court, married Rose Readings from Stoke Row, Oxfordshire in Chelsea in 1889 and in 1891 they were living at Queen’s Terrace in Fulham. Their oldest child George was born in Parthenia Road, Parsons Green the previous year. Its close to Eel Brook Common at the northern end of Wandsworth Bridge Road. A sister Maude was born in 1892, Reginald two years later and Winifred in 1896. By the time Gertrude arrived the following year, they had relocated via Wandsworth Bridge Road to Huntspill Street, Summerstown. Henry Cooper was doing very well in his bakery business based at No3 Pont Street, Belgravia, now one of the grandest, most exclusive parts of London. In 1901 there were five children and they were all still there in 1911, though another record would seem to indicate that George was abroad in the army. 17 year old Reg worked as a fishmonger. Unusually this census record indicates the streets that all the children were born in. 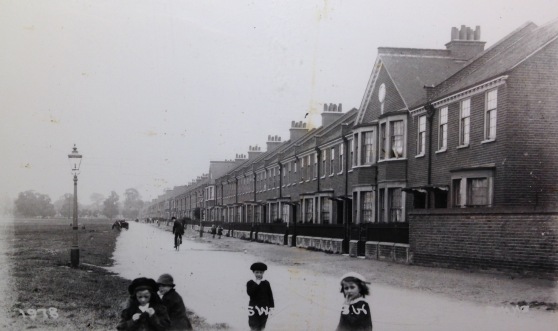 It would appear that Henry and Rose moved into a new road near Earlsfield in 1914. They were very likely one of the first residents of Swaby Road, part of a planned garden suburb, the Magdalen Park Estate. A wonderful photo from 1915 shows children playing in the newly built street, looking south towards Burntwood Lane. The Cooper abode at Nos 142 and 144 would be roughly where the horse and cart is, not far from the junction with Littleton Street. Currently one of these is for sale and the other in the process of a major refurbishment and shrouded with boards. The large circular plinths on the gable-ended houses are visible in the photo and these still exist. A decorative outer laurel motif suggests something might have been intended to be added in the middle – that remains oddly empty and plain, so perhaps the money ran out. 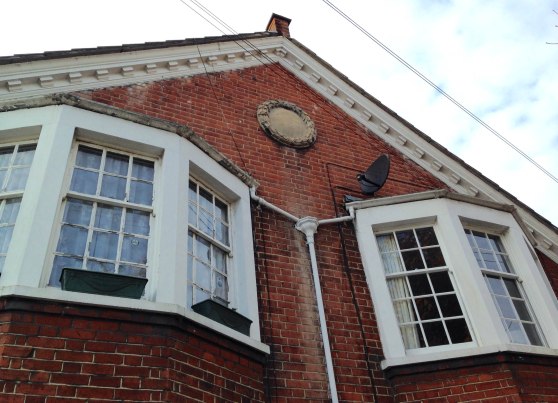 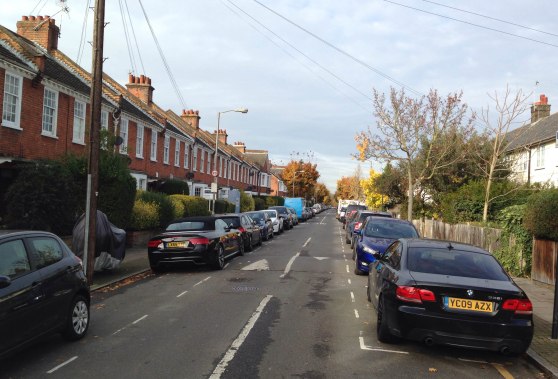 Across the road in the old photo is open ground and although the building of houses here was delayed by the war, a large section between the roads which were named Openview and Fieldview were retained for sporting activity. Originally this land was owned by Magdalen College Oxford and the good quality Edwardian housing designed in 1911 by builders, the Holloway Brothers, on the west side of Swaby Road, Burntwood Lane and Magdalen Road were the start of an ambitious project that was never completed as originally planned. The Council’s ‘Magdalen Park Conservation Area Appraisal’ describes it thus; ‘The west side of Swaby Road is made up of three long terraces, each composed of two building types in a Neo-Georgian style. In all, there are 81 two storey buildings and each has been designed to contain two flats, one on the ground floor with another on the first floor, making a total of 162 separate dwellings. This is a very fine composition with a style that is unique and possibly one of the finest examples of domestic architecture of its period within the Borough’. Reg’s next-of-kin details indicate his parents lived at 144a Swaby Road, two years later, George’s have them next door at 142a. Sadly Rose didn’t have very long to enjoy this splendid location, perhaps heartbroken at the loss of her two sons and a married daughter, she died in 1919 aged 63. Henry passed away in 1931, he was only 73 but lived longer than four of his children. 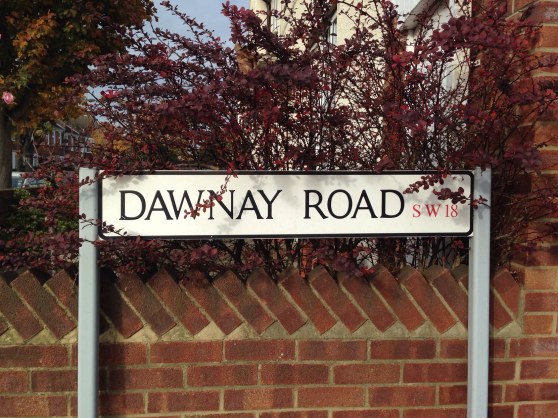 Rose never saw a road on the other side of the street being named after the Mayor of Wandsworth, Sir Archibald Dawnay. He was eleven years in office, right the way through the war years and when it came to drumming up recruitment fever he was right at the forefront, very much the driving force behind the local 13th Wandsworth Battalion, part of the East Surrey Regiment. Quite how she felt about having Dawnay Road, a permanent reminder on her doorstep of a man who may have stirred her lads into action, we can’t be sure. 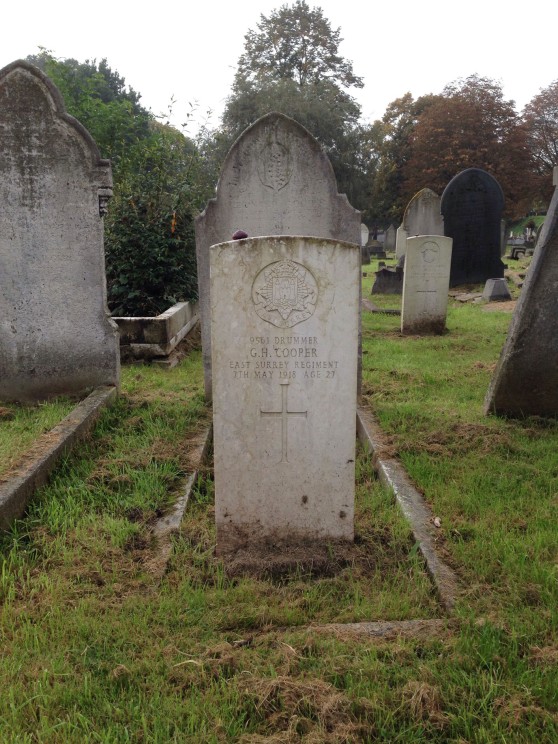 George’s military headstone in Wandsworth Cemetery is placed unusually, but not uniquely on top of an existing family grave. Records indicate this was only authorised in 1987 and put in position in 1993. The family headstone is now almost unreadable but its possible to decipher mention of his brother Reginald being lost at the Battle of Jutland. He was a ‘First Class Stoker on the famous HMS Invincible. Her destruction at the climax of the Battle of Jutland, resulting in the death of all but six of her crew of 1,031 was captured dramatically in some very famous photographs. In 1991 a British expedition marking the 75th anniversary of the battle located the wreck. The war years saw wedding bells for the Cooper family, Gertrude married in 1916 and Maud a year later, both in St Andrew’s Church by its long-serving vicar, Reverend Douglas Tudor-Craig. Reginald, most likely in uniform, married Blanche Violet Warren on 2nd October 1915 in Balham. Eight months later he was dead and Blanche would be a widow for 40 years. She died in Wandsworth in 1956. 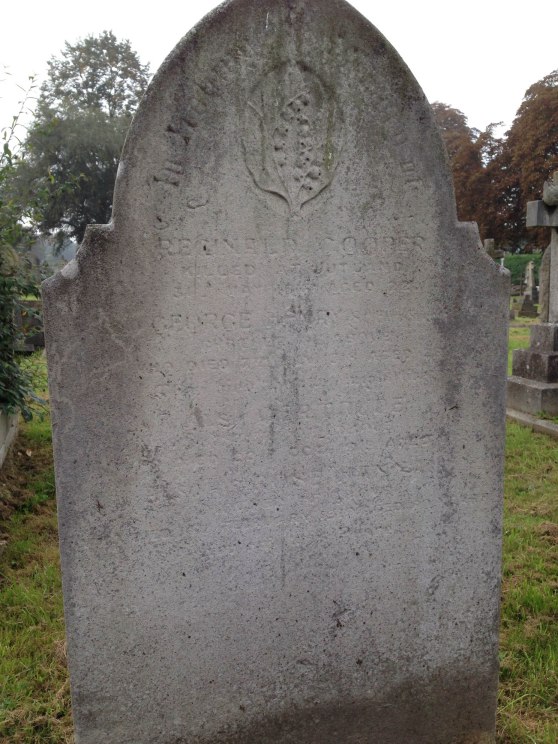 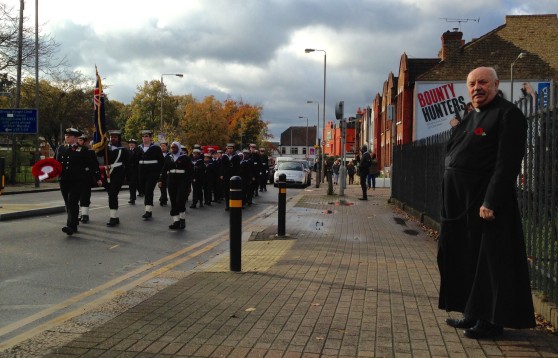 Maud and Gertrude Cooper both married servicemen. Maud wed Stanley Weller who was in the Royal Marine Light Infantry. Among the 82 names on the Swaby Road Absent Voter’s List, he is at No142, apparently serving on HMS Canterbury. Maud and Stanley lived on at 142a Swaby Road until her death in 1928. Gertude married Joseph Marcantonio from Eltringham Street in Wandsworth, the son of an ice cream maker. He had been invalided out of the 23rd London Regiment after two years service following a gunshot wound in 1915. Sadly after a little over two years of marriage, Gertude died aged 22 in December 1918. This was a very black year for the Cooper family. Her name is just about readable on that family headstone in Wandsworth Cemetery. 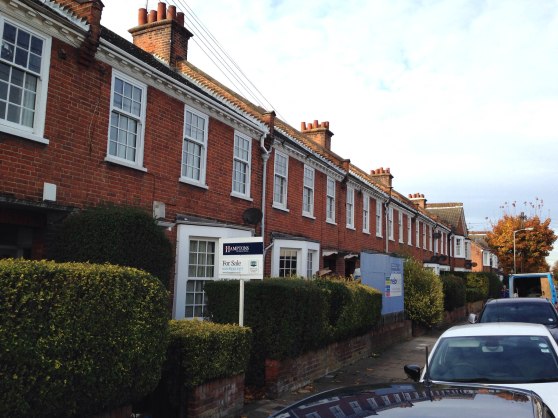 Although his military records have been lost, George’s army service number is consistent with a 1908 recruit into the East Surrey Regiment, when he would have been 18. Although he is listed at home in the 1911 census, another record places places him with the 2nd Battalion of the East Surreys in Burma. A long way from Huntspill Street. He would have returned from India at the start of the war and should in theory have gone to the western front in early 1915. One thing is certain, from the end of March, through April 1918, the 8th Battalion of the East Surrey Regiment suffered terribly in the wake of the German Spring Offensive. In the mayhem of a retreat, with gas and shells exploding over him on top of terrible weather, its unlikely George would have had much chance of doing any drumming. Its most likely that in the midst of this madness he was wounded and taken back to hospital in England. 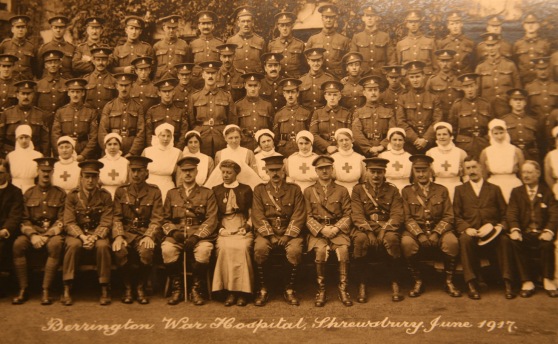 The ‘soldiers effects’ form tells us that George died of pneumonia in a Shrewsbury War Hospital in Shropshire and left an estate of £22 to his father. This may have been Berrington Hospital which was converted from an old workhouse and appeared to treat many soldiers who suffered from respiratory diseases, many of which were caused by the effects of gas. A desire to provide the patient with ‘fresh air’ may also have been a factor in choice of hospital and certainly Shrewsbury must have had a much better air quality than London in those days. 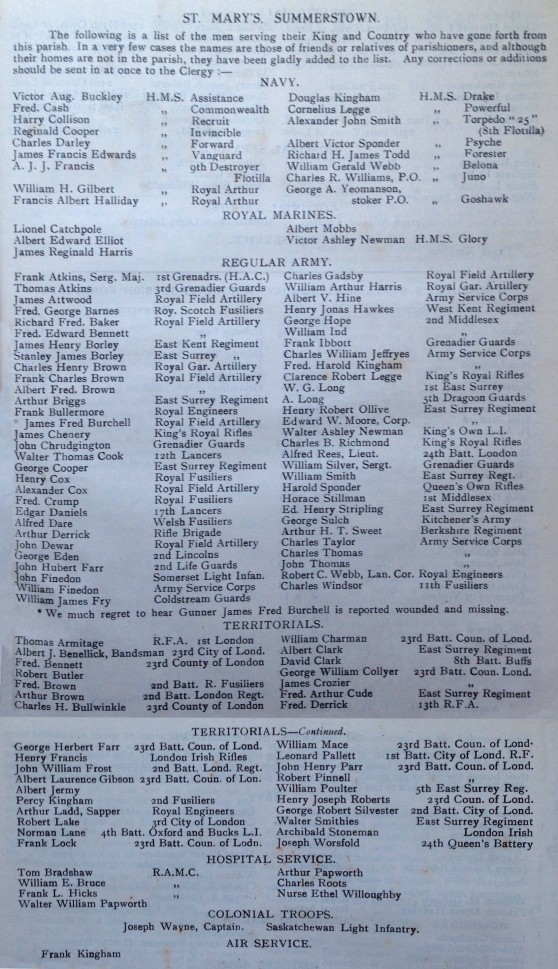 When the family lived at Huntspill Street there must have been a connection with St Mary’s Church but the move to Swaby Road very much took the family into the orbit of St Andrew’s. In October 1914 the very first list appears in the St Mary’s parish magazine of ‘Men serving their King and Country who have gone forth from this parish’. There are 124 names on the list, both Cooper brothers among them. One woman is included, Nurse Ethel Willoughby under ‘Hospital Service’. Twenty of these names would eventually appear on the war memorial. In June 1918 George’s death was announced in the parish magazine and that it was as a result of him being gassed.