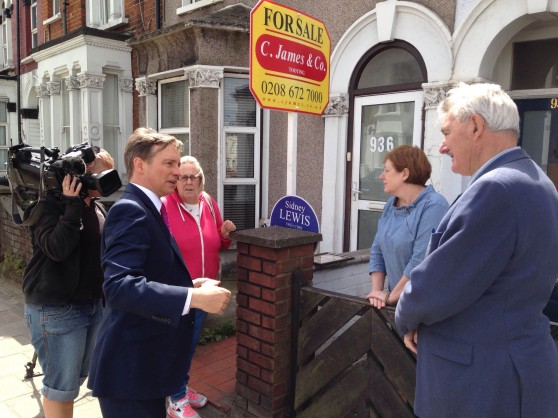 On Saturday Colin Lewis came up from Dorset to visit us and see what all this fuss is about a Blue plaque for his Dad, the twelve year old who is believed to be the youngest soldier to serve in the British Army in the First World War. We met at Clapham Junction and my first sight of Colin was him striding down the hill towards the Shopping Centre. He was head and shoulders above everyone else and with his blue jacket, beaming smile and military bearing he looked like Gary Cooper or John Wayne. We jumped on the No77 to Tooting and as we headed down Garratt Lane, Colin told me some of his Dad’s stories, how he had been swept up in the basket attached to the front of one of the trams which passed their home. Of the regular family get-togethers with various Aunts and Uncles in the house at 53 Defoe Road on a Sunday, playing cards with his Gran and of his Dad’s comment that he could gaze out of his bedroom window and see over the fields to Mitcham. We had heard that Sidney was tall for his age and at six foot three, Colin has clearly inherited his genes. Sid rejoined the army after the armistice and was part of the army of occupation in Austria, he was still only sixteen. In the Second World War he was in the police and worked in bomb disposal. Colin’s Grandfather Edward fought in the Boer War, shortly before Sidney was born. Through his National Service, Colin himself was swept into the Korean War in 1950. What a family.

When we got to the bend in Garratt Lane and the last section that used to be called Defoe Road, Colin knew where he was, though he hadn’t been in this area for about fifty years. We hopped off  at Tooting Broadway and Derek and Siobhan from ITV Meridian were outside the front door with their cameras, ready to capture the special moment. Then we all sat down in the garden under the huge cherry tree and listened as Colin talked about his Dad. He had been involved in one of the most horrific episodes of the First World War, the Battle at Delville Wood on the Somme in the middle of July 1916. Now assigned to the 106th Machine Gun Company and fighting with South African forces, his father was one of about 700 who remained unscathed out of an initial attacking force of over 3,000 men. The site of this carnage at ‘The Devil’s Wood’ is now the official South African National War Memorial. The wood was completely destroyed but one tree symbolically survived and is preserved to this day, the forest all around it having been replanted.

The house on Garratt Lane has been Gillian’s home for 35 years. For a while it was converted to flats but even though its back in its full original glory, it seemed small, though maybe that was just Colin seeming to fill it. He certainly knew his way around and the sight of the little brick extension at the back that was once the outside toilet made him recall the chopped-up sheets of The Daily Mirror that were used to do the honours with. His Grandfather who worked at what is now Springfield Hospital died in 1949 and his Grandmother moved into a nursing home in Belmont not long after. Colin has fond memories of shocking his wife-to-be, Rosemary when he smuggled his Gran a bottle of gin. ‘Thanks, son’ she said as she gratefully tucked it into her cavernous handbag. Sidney himself passed way on 12th April 1969 at the age of 66. After cremation, his ashes were spread in the gardens attached to Eastbourne Crematorium. 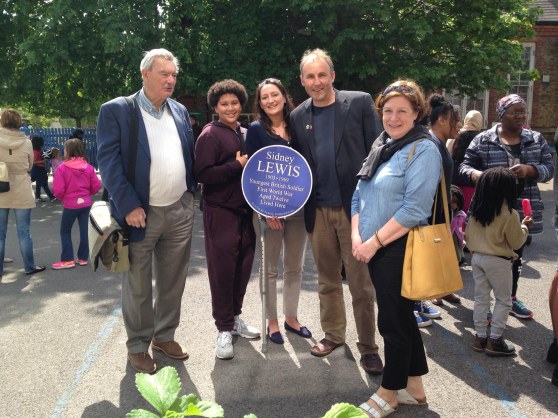 We then went round the corner to Broadwater Primary School and were warmly welcomed at the School Fair where I was allowed to make a short speech informing people about the Plaque Unveiling. There was a look of incredulity on one woman’s face when I told her that for the last two years I’ve been doing a Guided Walk past her house on Pevensey Road. The school has changed names over the years, it was initially Fountain Road School, surrounded by fields and reached by a path in Sid’s time. A pupil there was Horatio Nelson Smith, from Hazelhurst Road, the second youngest of the Summerstown182 who died aged sixteen on the Somme in September 1916, probably around the time Sidney got home. After a fraught session struggling with school register details on microfilm in the London Metropolitan Archives, Sheila and I recently found that Sidney had first gone to school on September 16th 1907 at nearby ‘Broadwater Road School’ the building of which is now the Al Risalah nursery on Gatton Road. The name of his younger brother Edgar also popped up. 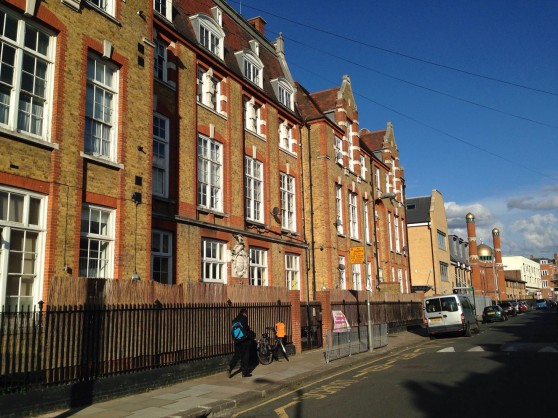 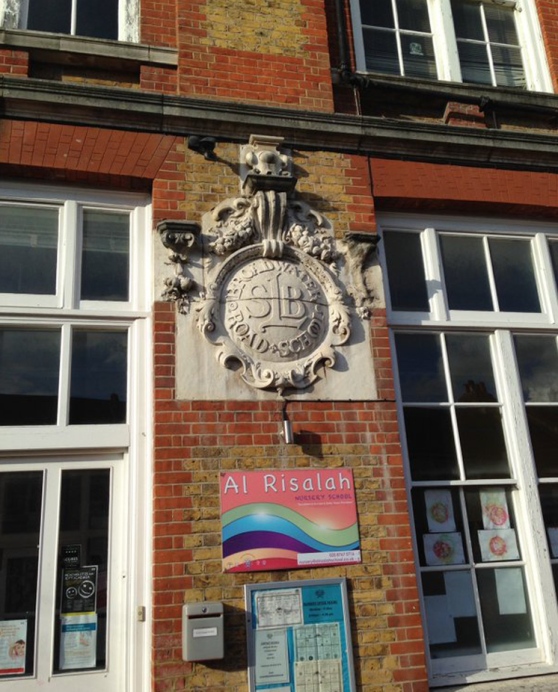 Who knows where else he went, but Colin thinks he may have finished off his education at Battersea Grammar. It may have been from there that he disappeared in the summer of 1915 to sign up with the East Surrey Regiment and join the war effort. Via a look at Gatton Road, we sat down for a drink in The Selkirk, one of so many businesses and individuals that supported our ‘Quid For Sid’ fundraising campaign. On our way to the bus-stop we stopped at the historic Harrington’s Pie and Mash Shop, which has been doing business here for 108 years. Sid would have been five when it opened and was attending the school in the next road. Sadly there was no time to sample their delights and it was a shame that we weren’t able to say more hellos but Colin needed to get back to Clapham Junction to jump the 530pm train. We made it with about a minute to spare but hopefully Colin had a chance to kick back and peruse the poem written about his Dad by John Byrne from Pevensey Road. 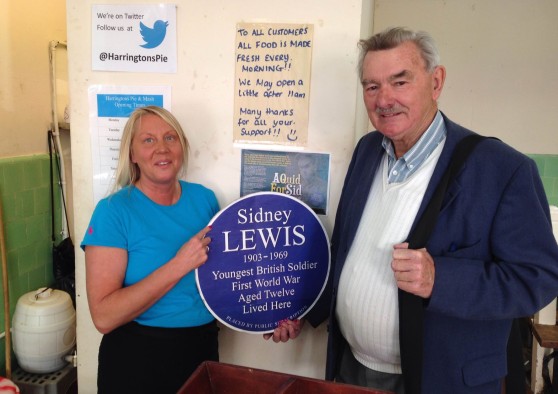 We are all intruiged by how a twelve year old could just run off and disappear, even in the crazy days of one hundred years ago when war fever and a sense of excitement gripped so much of the country. How could that happen? Apparently his Mother Fanny knew he was in the army but not that he was in danger. Certainly he would have had an extensive training period and surely one so young wouldn’t get anywhere near the front line. An older brother William was already serving in the East Surreys and it would appear that he was only fifteen when he joined up. ‘Uncle Will’ survived the war and eventually emigrated to California. Colin has strong family connections in the US and Sid’s brother-in-law, Frank, now in his mid-nineties lives in San Diego and gets all the news about the Tooting Plaque and loves hearing about it. It was only when word filtered back from a neighbour that Sidney was on the Somme that it was time for Fanny to find a birth certificate to prove his age and get him sent home, though having promoted him to Lance Sergeant and trained him to use a machine gun, it was probably done with a certain amount of reluctance. 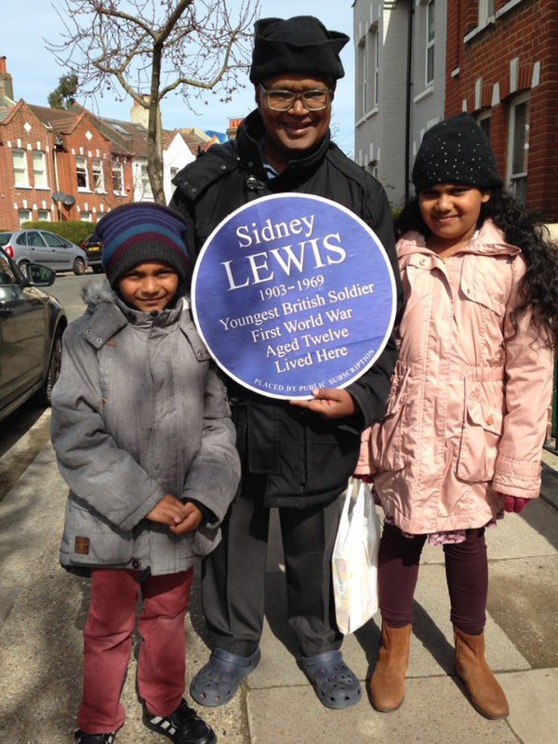 Colin’s pride in his father is so evident and like so many of us, his only regret is not asking more questions about it while he had the opportunity. When his Dad mentioned his Somme experience, it was taken with a pinch of salt – surely he was too young? It was only after his Grandmother died that Colin came across the battered and crumbling copy of The Daily Mirror, now preserved in the Imperial War Museum. He then got on with his life until about four years ago when he saw it reproduced in a feature about ‘Boy Soldiers’ in The Sunday People. He contacted the historian and author Richard Van Emden and the Imperial War Museum. They had heard rumours about a ‘Private S Lewis’ for some time but had never been able to verify exactly who he was. Now they were able to say that he was the youngest soldier serving in the British Army the First World War that they know about. The story received worldwide attention and we were fascinated to hear Tooting get a mention and discover that he had lived in our community. 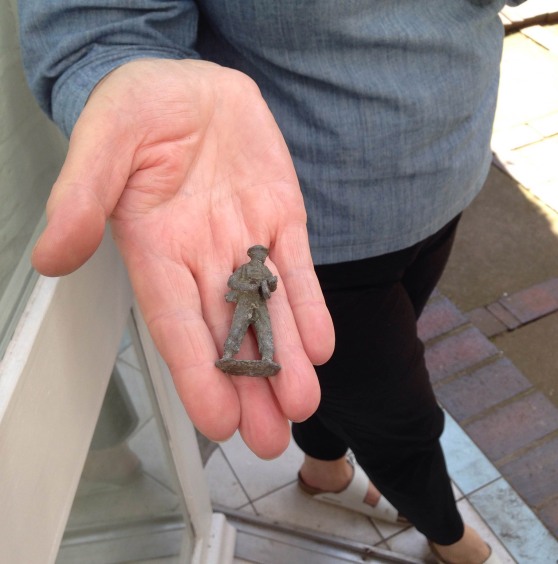 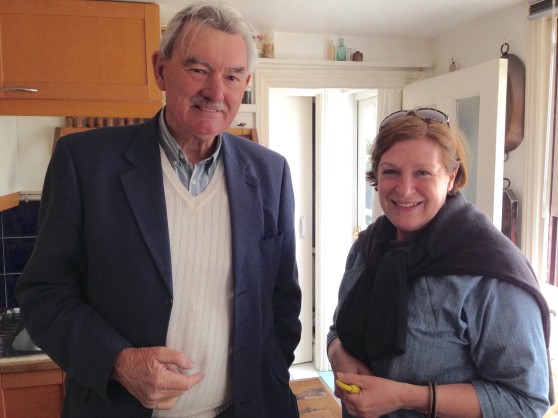 None of this would be happening without the goodwill and blessing of the current resident at what used to be 53 Defoe Road, now 934 Garratt Lane. What a great sport she has been. Gillian has lived there 35 years and is thrilled to know so much about the previous long-term occupants of her home. When I first contacted her, via a speculative letter through the door, I never imagined I would find someone who would embrace everything in such a wholehearted and supportive manner. It has made everything that has followed an absolute delight. Incredibly she told me that she had adopted a cat who had made his home beneath the campervan in her back garden some years before and by the most amazing coinicidence, she named him Sidney. Very sadly the feline Sid passed away soon after we’d got in touch. Yesterday she showed us a small lead soldier that she had discovered in the back garden. Colin will be back on 24th September to unveil his father’s plaque and is hopefully bringing about twenty members of the Lewis family along with him. There is already a lot of interest building and as we try to plan a most memorable day, if anyone has any ideas or would like to help in some way, we would be very pleased to hear from them. 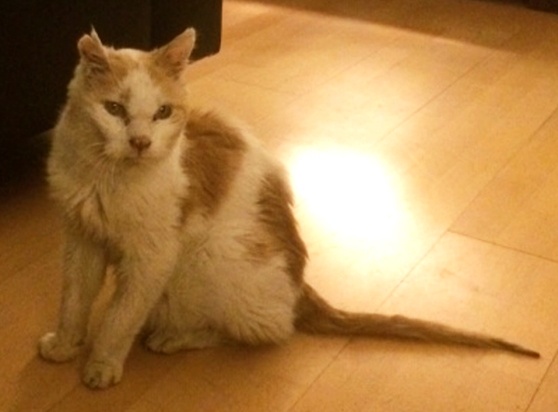 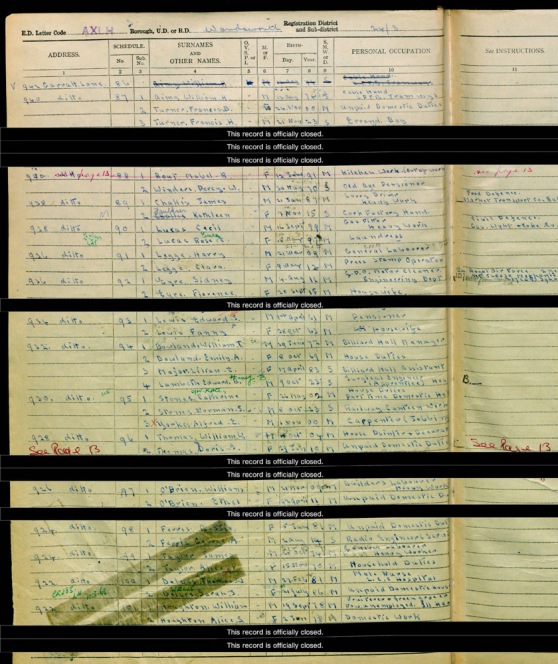 Many thanks to Chris, Marion and Sheila for genealogical background on the Lewis family and John Brown of The Streatham Society for help identifying ’53 Defoe Road’. The Plaque is currently being cast and we hope to pick it up sometime next month.  It will be unveiled by Colin Lewis on Saturday 24th September. A short ceremony will be followed by a First World War themed guided walk via Streatham Cemetery and light refreshments in St Mary’s Church, Summerstown.