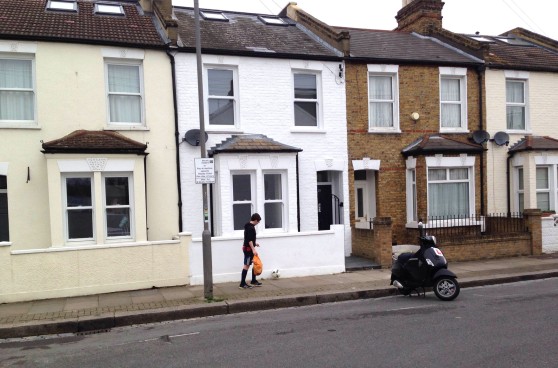 William and Frank Ibbott were two sporting lads from Huntspill Street whose football and cricketing talents were documented in the pages of the St Mary’s Church parish magazine in the pre-war years. They remind me of a story in a comic when I was growing up called ‘Billy’s Boots’ about a boy who played football in the winter and cricket in the summer. Billy Dane lived with his Gran and had found an old pair of ankle boots in the loft which he discovered had once belonged to the legendary ‘Dead-Shot’ Keen. The magic boots made Billy assume Dead-Shot’s extraordinary goal-scoring prowess. By remarkable coincidence, he then pulled a pair of old gloves out of his Gran’s trunk and whenever he put those on, would you believe, he became a superstar wicket-keeping cricketer. Unfortunately I can’t tell you that Jay is carrying a pair of Frank Ibbott’s old boots in that Sainsburys bag in the above photo, but I think of the brothers often as we pass by their door on a Saturday morning heading for our own regular kickaround. It’s the tidy little white house with the scooter outside. Come 1914, William and Frank were prime soldiering stock and quick to swap the green and white of St Mary’s FC for khaki. William James Ibbott was one of 30 of the Summerstown182 who died on the Somme battlefields and whom we are specifically researching this year. He was killed at the height of the battle, on 23rd July 1916 and is one of the 75,000 names commemorated on the Thiepval Memorial to the Missing. Frank Ibbott joined the elite Grenadier Guards and would appear to have survived the war. 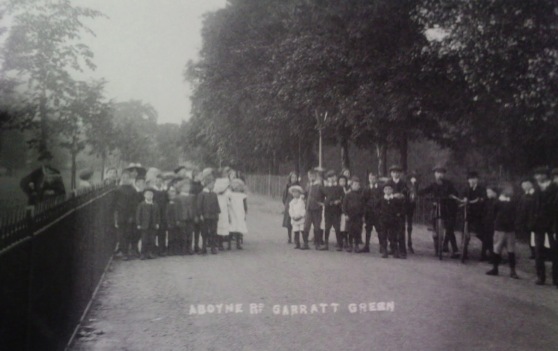 Nestling close to the bend of this distinctive angular road, Joseph and Rosetta Ibbott lived at 28 Huntspill Steet. They were there in 1901 when William was just 8. He had an older sister, Clara who was 10 and a younger brother Frank, aged 6. Their Dad worked as a ‘Lunatic Attendant’ most certainly in Springfield Asylum where he very likely knew Edward Lewis, Sidney’s father. William and Frank were just a short distance from Garratt Green and must surely have played a lot of their early football and cricket there. The house has just been whitewashed in true Mykonos style and it looks like Foxtons or whoever will soon be putting up their signs. 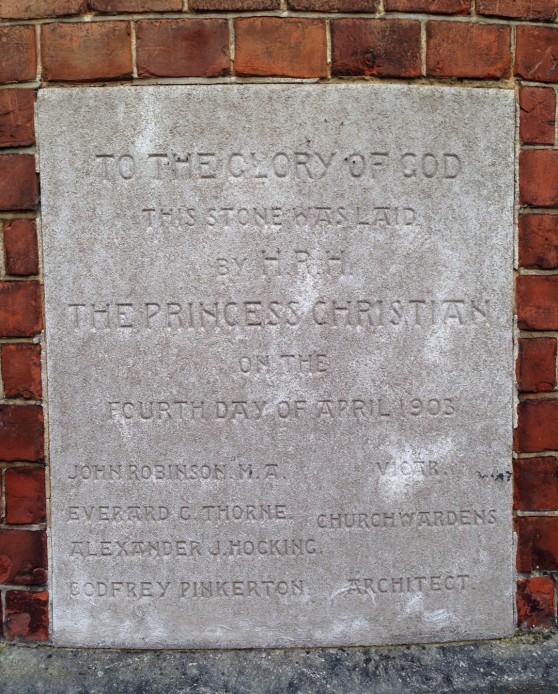 The Ibbott lads were both choirboys and sunday school regulars and I’m sure that their names would be found amongst the 600 contained in the bottle behind the St Mary’s Church foundation stone. They were Prize Winners in the ‘Boys Bible Class’ of February 1904 and were right at the forefront in the new Church on the sunny day it was consecrated by the Bishop of Southwark on 30th April that year. Their names are mentioned in the first group of choirboys who at 3pm formed a procession outside the new church. It had been eleven years since the old church was demolished. This was ‘a day looked foward to by the inhabitants of this parish for many a long year, sometimes almost with despair’. The service culminated with the baptism of the vicar’s twin sons, John Lovell and Innis Lovell Robinson. The church cost about £10,500 and in his address the Bishop not only mentioned the large donations made by the weatlthy Gassiott, Thorne and Lancaster families, but also that ‘the locality is not by any means rich, but from the small houses £400 has been collected’. They still needed more and ran out of funds when it came to build a tower.

The next few years of peaceful Edwardian life must have been a glorious time to grow up in Summerstown. A new active church, houses being built, a thriving friendly mutually-supportive community, truly rose-tinted  days of outings, lemonade and watercress sandwiches. Typical was 27th June 1907 and the sunday school excursion to Bookham. 460 children and 96 adults assembled at the Garratt Lane schoolroom and marched two abreast to Haydon’s Road station, proceeded by the school banner. Mention is made of a white kitten boarding at the station and travelling all the way under the guard’s van. After a day in the grounds of the Merrylands Hotel where amusement rides were available, there was a tea of bread, jam and cake. Each child was then given a banana and sympathy was expressed for the caterers having to clear up 460 skins. They got back at 9pm and ‘Plough Lane seemed to be full of Summerstown people, tired but happy, most bringing back spoils from the country in the shape of flowers’. The Band of Hope was thriving, crashing their cymbals regularly on the streets of Summerstown and in May they enjoyed their annual excursion to Court Farm, Warlingham. They trooped up Burntwood Lane and got a train from Wandsworth Common. The day was idyllic, ‘Everything looked fresh, new paint, whitewash, and best of all, grass that had not been trodden bare by thousands of little feet. The fields were one mass of buttercups and the hedges covered with white may’. 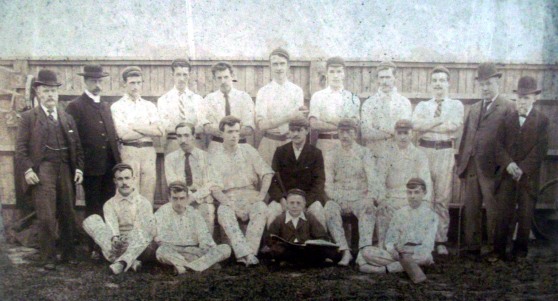 Reverend John Robinson was a keen cricketer and a St Mary’s team in which he often participated, had been established for a number of years. In 1909 they decided to start a Junior Cricket Club and secured a pitch ‘through the kindness of Mr Stevenson in a meadow down Riverside Road’. Not too many meadows to be seen down there right now. It was around this time that the owner of the box factory was being decidedly unkind to 44 young women workers who had the temerity to go on strike. Perhaps his act of goodwill on the cricketing front was a PR gesture to improve his image which had definitely taken a knock. There is a battered old framed photo of a cricket team on top of a cupboard in St Mary’s Church. No names, no year, but it just might include the Ibbott brothers. 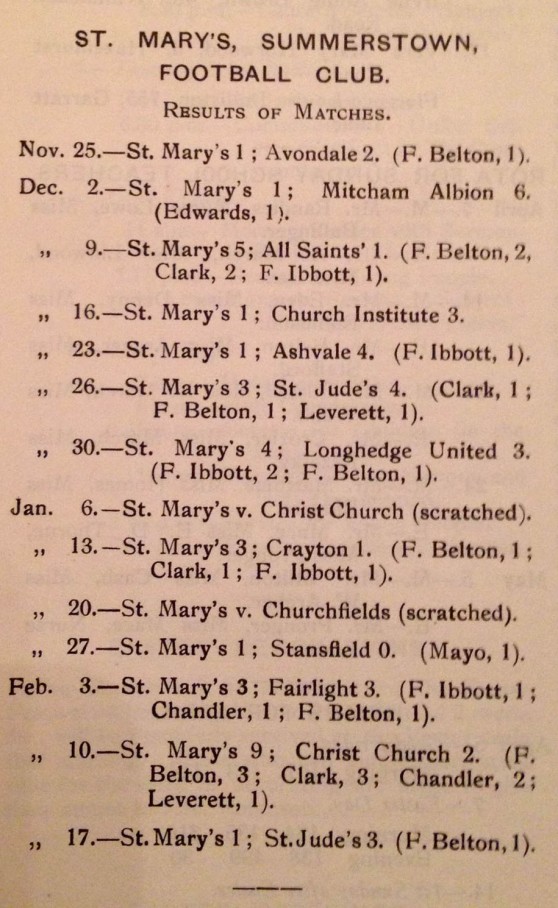 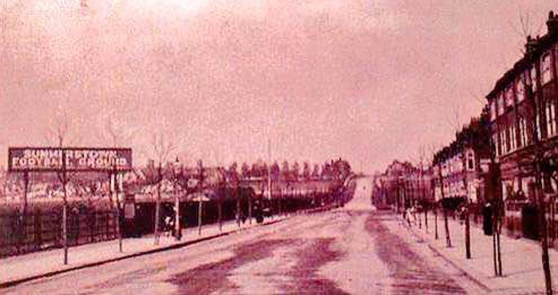 By 1911, the three Ibbott children were all grown but still at home. William was an apprentice compositor and Frank was a lift attendant, working for the Remington company. Clara worked as a vellum binder. One child was noted in the census as having died. In the September edition of the parish magazine, Frank is mentioned as a regular top-scoring batsman in the reports of Junior Cricket matches against such teams as Emmanuel, Sutton Pioneers and Stockwell United. That Autumn, James Jenner Crozier formed a St Mary’s Football Club playing at Magdalen Road. This may well have been on a ground which was later home to Summerstown FC, on the left in the above photo. It is situated where Earlsfield Library currently stands. At a meeting in the schoolrooms on 11th September, funds were raised through a concert which included ‘humorous songs’ and two clarinet solos. Frank was elected captain and it was decided that the team would play in green and white.

The following year the boys, unlike fellow member of the Summerstown182, Victor Wayre, were no longer in the choir. Frank 16 was now a leading goal-getter for St Mary’s Summerstown FC. In their matches that winter he notched on six occasions, including a brace against Longhedge United. He also scored in a 3-3 draw with Fairlight. By the end of the season they had played 23 matches, won 9 and drawn 3. Honorary Secretary, James Crozier wrote ‘The success of the club is mainly due to its captain, Mr F. Ibbott, in the way he has captained the club’. In spite of this glowing reference, in September 1912, the captain elected for the new season was Mr W. Ibbott, also captain of the cricket team. The brothers had the second and third highest batting average in the 1st IX, only William Mace, their Huntspilll neighbour bettered them. Frank had twice the average of his brother and the second highest bowling average. He was also amongst the goals again that year including two in a 4-2 win over St Anne’s. The following season there were no football reports but William was re-elected cricket captain and Frank was still clocking up good averages. The Football and Cricket Clubs were now combined under one ‘Athletic Club’ umbrella and its was proposed to start a cycling section. At this time ‘teams and particulars of matches’ were displayed in Mrs Aslett’s shop window at the bottom of Bellew Street. Try that one today in Foxtons or Jacksons. It was around this time that a club called Wimbledon Borough FC moved to a ground just half a mile or so down the road, on the corner of Plough Lane and Haydon’s Road. They became Wimbledon FC, FA Cup winners in 1988 and founder members of the Premier League. Its very likely that in 1912 their scouts were casting an eye over young Frank Ibbott. 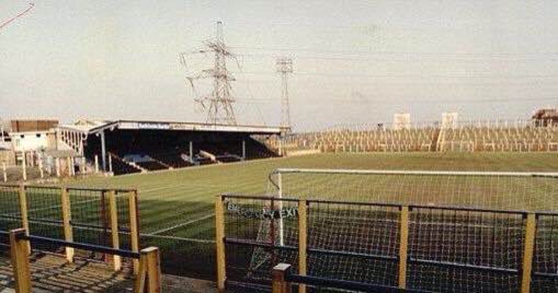 One year later, as the world turned upside down, William and Frank were perfect soldiering age. William joined the 8th Battalion of the Royal Fusiliers. Frank is listed in the parish magazine as being in the elite Grenadier Guards as early as October 1914. He was nineteen and in the prime of his life. In the July 1916 issue of the St Mary’s magazine, in the paragraph after the one where the deaths at Jutland are noted, Reverend Robinson recounts news of his star sportsman. ‘We are glad to know that Frank Ibbott of the Grenadier Guards, has so far recovered from his serious operation and that he is shortly leaving the hospital at Brighton for convalescent treatment’. Around this time, just as Frank was getting better, his older brother William would have gone missing on the Somme battlefield. 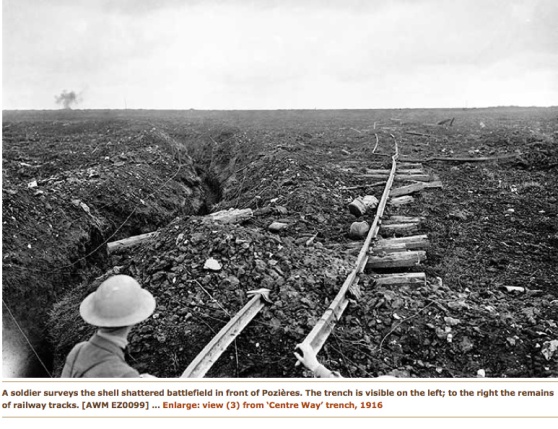 The date of his death and where his battalion fought, would suggest that William Ibbott died on the first day of the Battle of Pozières, when the village was initially captured. This bloody encounter resulted in 23,000 casualties in six weeks. Pozières is notorious for the extent of the Australian losses and their official historian Charles Bean noted that the Pozières ridge ‘is more densely sown with Australian sacrifice than any other place on earth’. In recognition of this, The Australian War Memorial owns a little piece of France, the Windmill site at Pozières. It was from here that French soil was dug up to scatter on the coffin of Australia’s Unknown Soldier when he was laid to rest at the Canberra Memorial on 11 November 1993.

The first and only mention of William comes in the August 1917 issue when Reverend Robinson wrote ‘The War Office has now assumed that William James Ibbott  of the Royal Fusiliers and Archibald Dutton of the East Surrey Regiment, who were reported as missing some months ago, are dead. Our sympathy goes out to their relatives’. This was a year after what is officially recorded as his date of death. In the years after the war there is little mention in the parish magazine of football or cricket as the community struggled to get back on its feet. In 1921 it was noted that St Mary’s FC were in Division 4 of the Wimbledon District league and playing at Stamford Farm, Greyhound Lane in Streatham. Results are listed but there is no mention of Frank or indeed any other players. Whatever happened to him, he is not listed in the CWGC War Dead. We can only hope that he recovered from his wounds, survived the War and went on to lead a happy and fulfilled life. It would be good to know that his serious operation didn’t stop him from playing sport again. 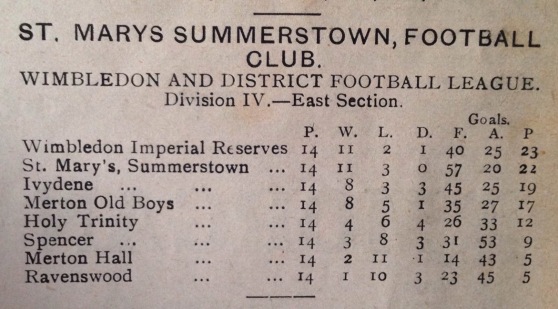