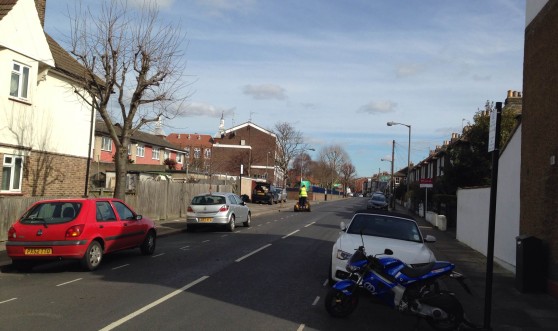 A photograph of a V.J. Day street party in 1945 has gripped the attention of all who have seen it. So many of the faces now have a name or have been recognised when its been shown on one of the Summerstown182 walks. Its taken from the other side of the street and looks over at a stretch of houses from No132 to No142, Smallwood Road. They were all demolished in the sixties and the site is an odd arrangement of flats backing off what is left of Foss Road. Iris Clay’s maternal grandparents, William and Alice Richardson moved into 142 Smallwood Road in 1916 after William had been badly wounded at Ypres, and was training at Epsom Camp for a new, sustainable post-war occupation. Alice, who is the silver-haired lady in the middle of the front row in the party photo is pictured below thirty years earlier wearing the uniform of a munitions worker. William and Alice had five children, the eldest of whom, Billy, died in 1935. One of them, Ellen Richardson is also pictured below. By the outbreak of WW2 the others had moved on and married but were living in adjacent houses with children of their own. The little terrace of six properties was occupied by ten to eight families. By the end of the Second World War when the photo was taken, there were at least seven or eight children living at No138. Iris’ mother and father, Tom and Lilian had four children and the Welch family also lived there. At the height of the bombing raids the whole extended family would huddle together in the ground floor of No142. Things were quite basic, there were very primitive outside toilets and the back staircase was extremely steep and narrow with no light to guide the way. ‘However there seemed to be something of a village lifestyle there at that time, especially at the lower end of Smallwood Road, with so many families living in such close proximity’. 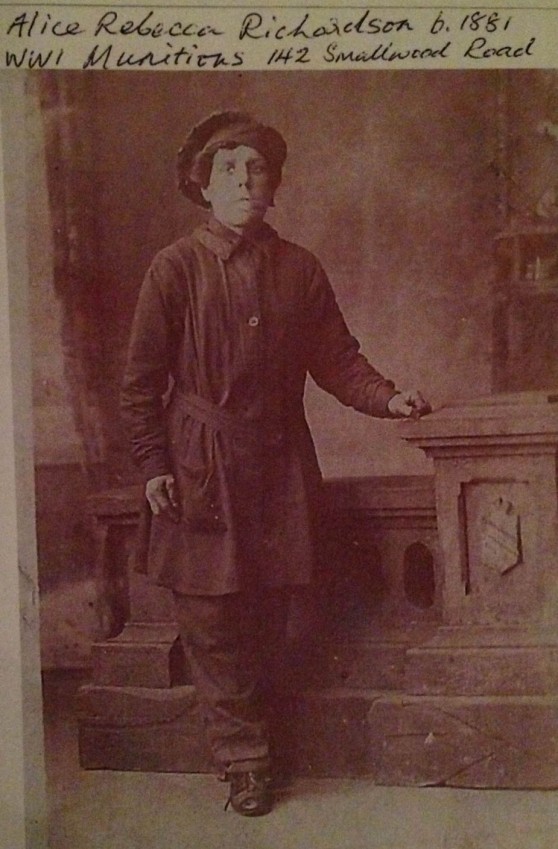 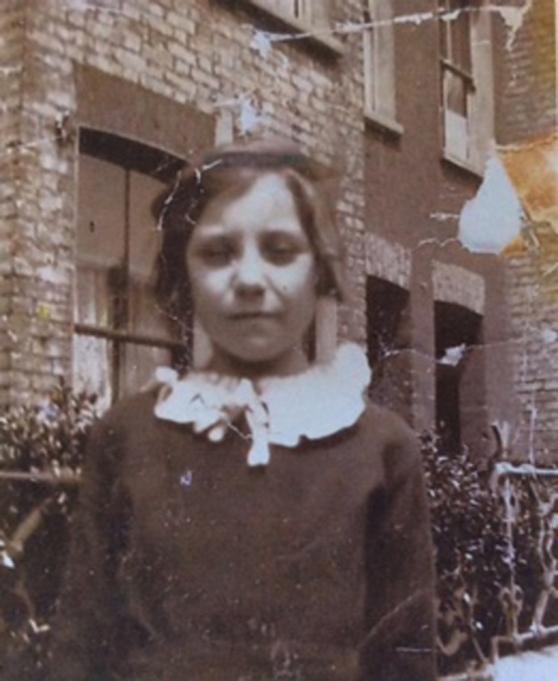 Iris and her family would probably not have known it, but a generation earlier their little terraced house was home to the Hatchers. Frank Hatcher was an undertaker and some-time plumber from Wandsworth who married an Alice Mary Taylor on 16th February 1890. His father John had also been an undertaker. Their first home would appear to have been Gladstone Road in Wimbledon. Harold Victor Hatcher was born on 28th April 1893 and baptised at Holy Trinity Church, South Wimbledon. In 1901 they were living at 69 Defoe Road, half a dozen doors away from Sidney Lewis who was born two years later when the trams arrived. If you look at the above photo Sidney’s house is roughly where the second estate agent’s board is. No920 used to be No69 Defoe Road and that’s where the Hatchers lived. Eight year old Harold was the oldest of three children with a brother Wilfred and baby sister Edith. Further moves over the next decade took them to Mandrake Road and 26 St Cyprian’s Street in Tooting. Another brother Leslie was born in 1903. 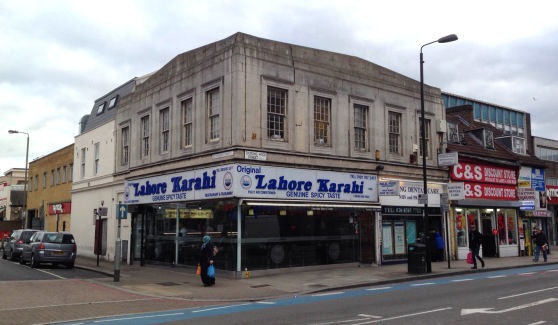 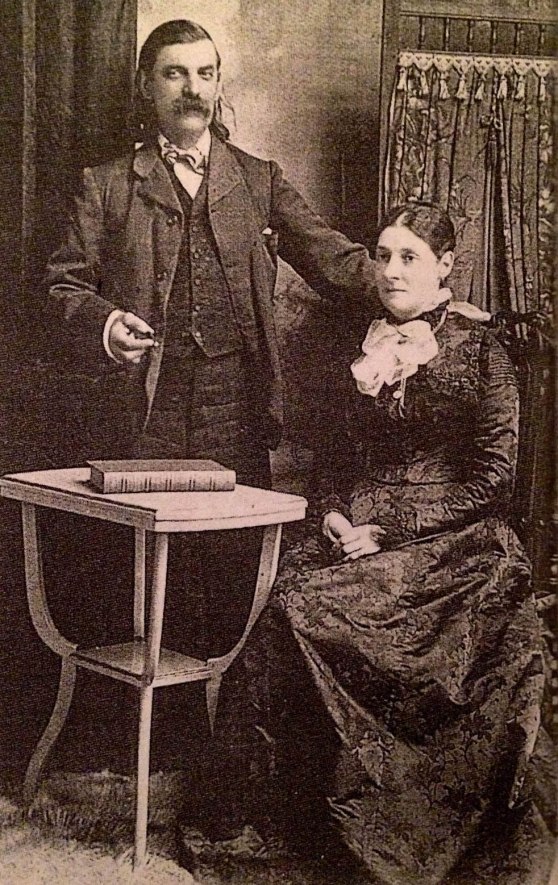 The house there was right on the corner of Totterdown Street and undertaker Frank may very well have done business with William Mellhuish, whose funeral business headquarters and family home on the corner of Totterdown Street  and Tooting High Street, were just round the corner. In fact you can see both No26 and the funeral parlour in the photograph below. Mr Mellhuish and his wife were leading lights of the local recruitment drive of 1915. With his long black hair, extravagant moustache and sombrero, ‘Billy’ Mellhuish was quite a Tooting personality. As an independent councillor, his remonstrations over the placing of the Edward VII statue earned him the moniker of the ‘Tooting Troublemaker’. His firm stand secured the placement of the statue in Tooting rather than in Wandsworth. The site of his office is now one of the best loved eateries in Tooting, the renowned Lahore Karahi. 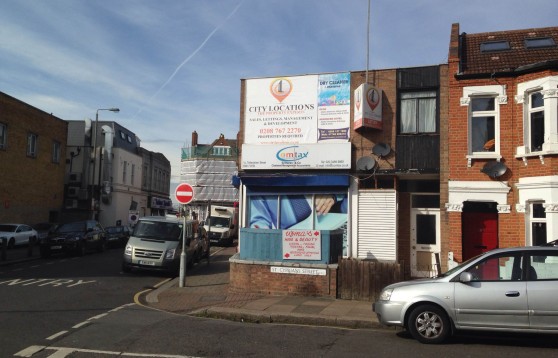 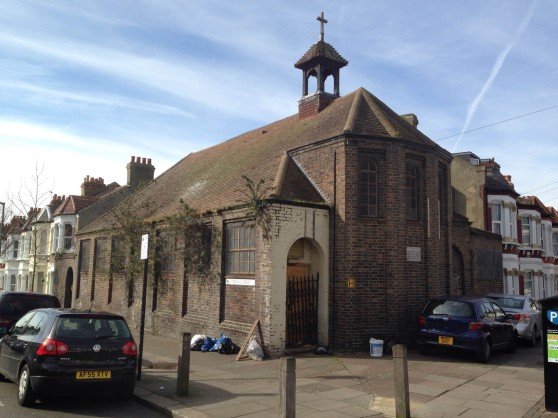 At the other end of St Cyprian’s Street on the corner with Kellino Street is the charming St Swithun Mission. In 1914 two houses were bought here and a small wooden church was dedicated in 1916 as an adjunct to nearby All Saints in Brudenell Road. Over time, it attracted a sizeable Sunday School but only ever a small congregation. In the early 1930’s a local ‘buy a brick’ campaign resulted in a more permanent structure and the foundation stone was laid by the Bishop of Kingston on 18th June 1932. Not long after the war it was sold to the Association of Boys’ Clubs and became Tooting Boys Club. If Morrissey and The Smiths had hailed from these parts this would have been where they shot the album cover. Later it was a Hindu temple and a martial arts centre but has probably been empty now for about ten years. Whatever next?

By 1911 the Hatchers were a mile or so down the A24 at 66 High Street Colliers Wood with another three children. Harold was 18 and working as a glazier and printer, doubling up on his trades, a bit like his old man. The address is now the home of Colliers Wood Community Centre. I called in to see what they knew about their location and was warmly received by a lady who spent a considerable amount of time looking for an old photo of the cottages which had been there before. These were demolished to make way for the Centre in 1966 and they have just celebrated their fiftieth birthday. 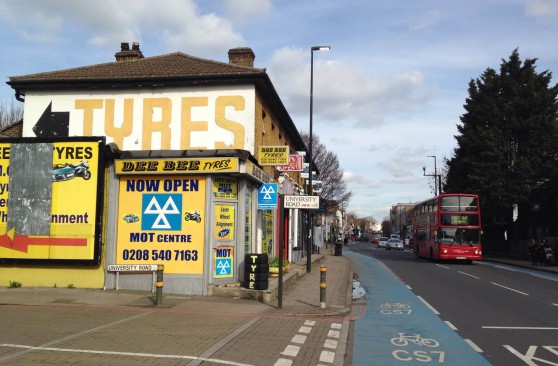 Frank and Alice had been married 21 years and had nine children in total, three of whom had died. Alice herself passed away aged 53 in 1918 and the CWGC next-of-kin details describe Harold as the ‘son of the late Mr and Mrs Hatcher’ so possibly Frank had also died at this point. Some of the children however carried on living at Smallwood Road till at least 1921 when Leslie Hatcher wrote it on his attestation form. Curiously there is no mention of 138 Smallwood Road on the absent voters list, Wilfred and Leslie would still have been too young to vote. 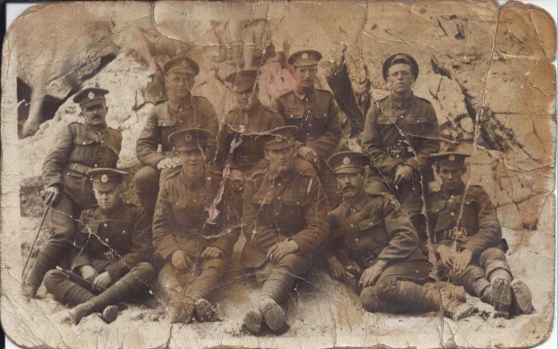 Alfred Kirby next door is on this list. His grandson Neil heard about our project on Radio Jackie and has since joined us on a number of walks. Charles Alfred Kirby, who was born in Groton Road Earlsfield, lived at 136 Smallwood Road at the time he volunteered. He went to France in 1915, and survived without a scratch, though he was gassed on several occasions. He is in the back row, second from the left in the above photograph. Neil sent us these other beautiful photos which he believes were taken at 136 Smallwood Road. They include his Grandmother, Betsy with her daughter Florence, (known as Flossie) and the Johnsons from No140. George is holding the dog and Henry Johnson is pictured in Aldren Road doing his rounds as a costermonger. Extraordinary to think these people would all have been so familiar to the Hatchers but sadly, so far we have no pictures of them. 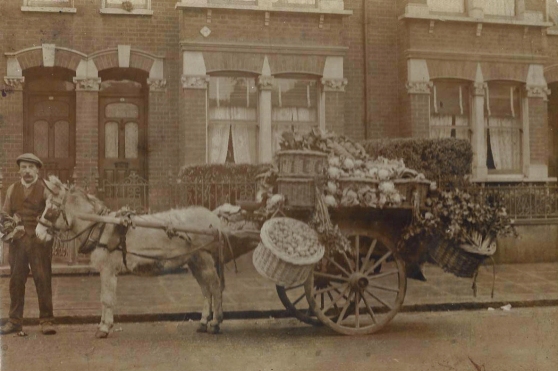 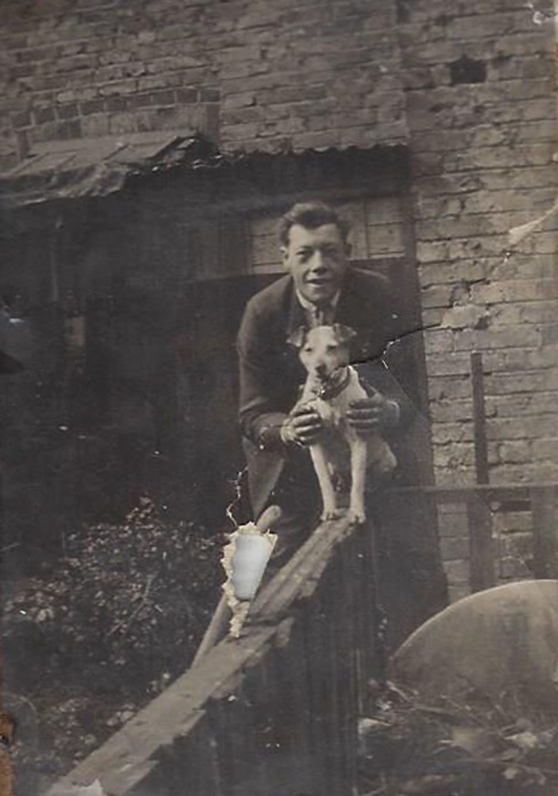 Wilfred joined the East Surreys in Wandsworth in May 1915, he was underage but only just. He survived the war and in 1923 he married a Mabel Lingham from Tranmere Road. Twelve years later his younger sister Doris married Mabel’s brother Percy. Lesley Hatcher joined the Royal Army Medical Corps in 1921. Leslie died in Hammersmith aged 64 in 1967. Wilfred died the same year in Carshalton aged 71, Mabel passed away three years earlier.

Harold enlisted with the 12th Battalion of the famous King’s Royal Rifle Corps in Rotherhithe. Raised in 1756 to defend the colonies against the French and native Americans, early recruits were colonists and ex-regulars. They adopted an ‘Indian system’ of forest warfare with lighter equipment, moving in more mobile and open formations. The 12th (Service) Battalion, King’s Royal Rifle Corps proceeded to France on the 22nd of July 1915, landing at Boulogne. Harold’s medal card indicates that he may have been with them. In 1916 they were in action at the The Battle of Mount Sorrel and The Battle of Delville Wood. Harold’s date of death is given as 19th September 1916 and something happened around this time in the Ginchy area as the Commonwealth War Graves Commission lists 31 casualties of the 12th King’s Royal Rifle Corps between 18th and 21st September. The majority are on the Thiepval Memorial. This may have been at what was known as the Battle of Flers–Courcelette. Here tanks made their tentative battlefield debut and the son of one Prime Minister, Raymond Asquith was killed while another future Prime Minister, Harold Macmillan was seriously injured. 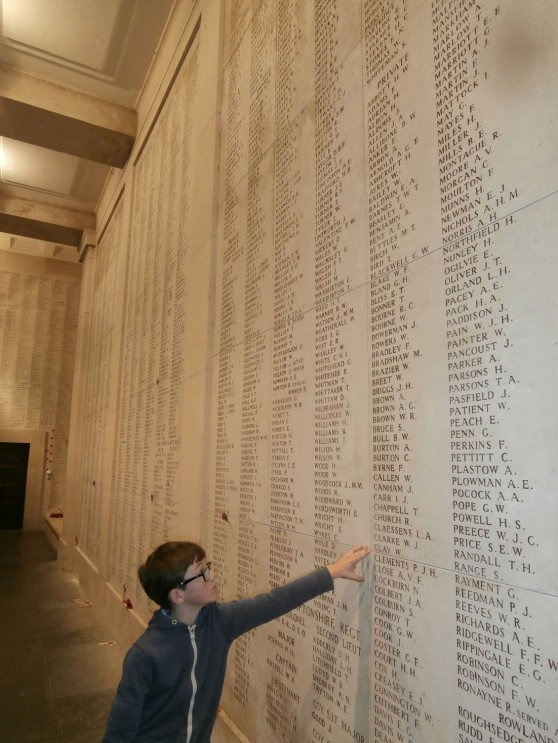 Back at 138 Smallwood Road, Thomas Clay, Iris’ father was the youngest child of Private William Clay. Tom never saw his father, who was killed at a place called Westhoek Ridge on 8th August 1917. This summer it will be the greatest pleasure to take Iris to the Flanders battlefields and attend the ceremony at the Menin Gate in Ypres, upon which her Grandfather’s name is inscribed. The following day we will travel an hour or so to the south and the main Somme Commemoration at Thiepval Memorial on which the name of Harold Victor Hatcher is written. Sidney Lewis made it home and his name wasn’t written up anywhere – until now. In September a plaque raised by the people of Tooting will be placed on the house where he once lived in Garratt Lane.

Thank you to Neil Kirby for allowing us to use his family’s photographs and to Chris, Iris and Sheila who have contributed so much to this story.