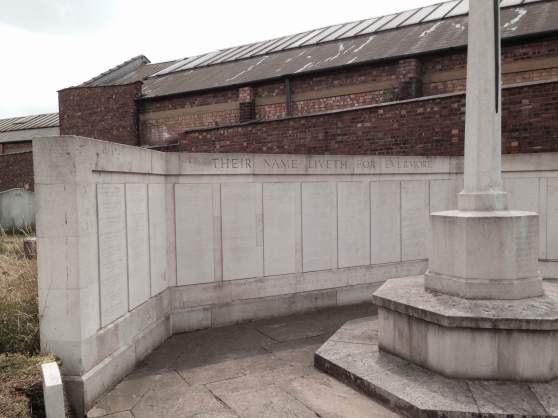 Grimsby seems very much on my radar at the moment. A few weeks ago I took an old friend to see the Mariners play at Woking. John’s had a soft spot for Grimsby FC since 1939 when a Billy’s Boots style footballer-cricketer called Harry Betmead signed his nine year old’s notebook. Apparently in those days they gave every visiting player a packet of fresh plaice. My own recollection is from half a century later, in the innocent pre-Sky days when football still had a sense of humour. Grimsby came to Plough Lane to play Wimbledon in an FA Cup fourth round tie and packed the away end with a sea of inflatable ‘Harry the Haddocks’. How incredible this week to find that one of the Summerstown182 had joined the 1st Battalion of the Lincolnshire Regiment in Grimsby in 1914.

John Williams, a bacon provisions curer from Camberwell married Catherine Thompson in 1886. Their first child Frederick John Pritchard Williams was born on 12th May 1887. Sometime between 1891 and 1901 the family moved to the Kelvin area of Glasgow, where four of their nine children were born. Eight of these survived, five boys and three girls. By 1901 they were back in Camberwell and like so many people from the area just south of the Thames, they were part of the great exodus to the open spaces of southwest London and descended on the daffodil fields of Pevensey Road. They were at No50, not too far along from houses that would be filled by the Cooks, Mangans and Dears in later years and close to the Dell family at No35. Definitely more the posh end of the street, with a lovely view of Smallwood School and, if it had been around at the time, the helicopter landing-pad on the top of St George’s Hospital. Fred was not present for the 1911 census and the next we hear from him is Grimsby. On 1st October 1916 one of Fred’s sisters, Maria Jane Williams married a soldier called Sidney Piercey in St Mary’s Church. The certificate is preserved on the same page of the register as Eldred Henden of the Summerstown182, who wed Grace Lowe one week later. Catherine was living at No50 until at least 1932 with son George who served in the Navy until 1929.

Quite why Fred ended up in Grimsby joining the Lincolnshire Regiment is a mystery. A medal card survives bearing the date 26th January 1915 when he arrived in France. On his attestation he listed his home town as Tooting. He was wounded in France, very likely in the fighting at Aubers Ridge. This disastrous attack on 9th May was abandoned because of a lack of shells and the huge numbers of casualties, 11,000 in just two days. By the end of the war 75% of the 1st Lincolnshire Battalion had been either killed or wounded. Fred was brought back to hospital in London. His death on 23rd May 1915 is recorded at Whitechapel and he is buried in the magnificent Kensal Green Cemetery in west London. He is in good company there with the likes of Isambard Kingdom Brunel, William Makepeace Thackeray and Blondin who crossed Niagra Falls on a tightrope in 1859. Three of Fred’s brothers are on the absent voters list at 50 Pevensey Road in 1918; William was in the Royal Army Medical Corps, George and John were both in the Navy.

A bizarre twist in the tale of Fred Williams is that his identity was assumed by another serviceman who also lost his life in the First World War. The service record of a George Samuel Layton confirms that he served as a stoker as Frederick John Pritchard Williams from 1906 until his drowning on HMS Strongbow in October 1917.  How and why this came to be will remain a mystery. Soldiers serving under an alias was not unusual, but taking a person’s identity seems particulalry odd especially as they were still living. Its very likely that George came across Fred some time around 1906 when he was nineteen, perhaps there was some drunken scrape or a game of cards, somehow Fred lost his papers and George went off with them? To keep the ruse up for eleven years was quite something. In the remarks column at the bottom of his service record a handwritten note reveals the truth ‘according to relatives this man’s correct name is George Samuel Layton. Served as FJP Williams’ In fact its quite possible that Fred’s parents John and Catherine at 50 Pevensey Road would have received two notifications of his death. Quite literally, he is, the man who died twice.

UPDATE: In July 2015 I got an email from Reg Harvey, a nephew of Frederick John Pritchard Williams, who was delighted to come across this post. ‘By happy chance, we discovered your website and your article, “The Man Who Died Twice”, and are most grateful to you and your team of researchers for solving the mystery of Frederick’s death’. Reg knew 50 Pevensey Road extremely well, having been born there in 1929. He explained that he and his wife had recently been researching their family histories and were keen to discover the burial place of Frederick Williams. They were totally bemused to find a naval service record showing his death at sea in 1917 when the family knew him to have died in the UK from wounds received in France while serving in the Army.  Reg was aware that his uncle had served in the Navy but his information was that he deserted and was believed to have worked as a trawlerman until the outbreak of the First World War. Then, under an amnesty, he had volunteered for the Army. This explained how Fred came to be in Grimsby and his choice of regiment, the Lincolnshires. Reg’s father was Charles Frederick Harvey and he was married at St Mary’s Church on 28th September 1928. He and his wife Lilian took over the tenancy at 50 Pevensey Road after Catherine Williams’ death. Charles was a Royal Navy veteran of the First World War who died in 1943 when serving in the London Fire Brigade. Reg’s mother, Lilian Annie Williams, lived in the house until her death in 1976.

A few weeks later I made a trip to St Mary’s Roman Catholic Cemetery in Kensal Green to visit Fred Williams. I had been to The National Archives and was on my bicycle and considered it would be a pleasant little afternoon diversion. It turned into an epic trek, through endless rebuilding schemes in Acton and Willesden with trucks, construction sites and roadworks at every turn. Via a path alongside The Grand Union Canal, I finally emerged near Wormwood Scrubs prison and the back of St Mary’s Cemetery. It is quite immense and seemingly packed with Irish, Italian and quite a few Polish graves, a gothic riot of statues of Mary, Jesus and assorted saints.

One famous incumbent is the Jamaican-born Mary Seacole, known for her outstanding nursing work at the Crimea. The war memorial is tucked away in the south west corner, rather unattractively situated next to an old brick warehouse. Fred’s name was easy to find, on the wall directly behind the cross. Each of the names had a number after it, (Fred’s is Number 1) which appeared to correspond to 16 flat stone slabs to the left of the cross where presumably these individuals are buried. The cemetery is a very special atmospheric place, perhaps not as well known as its ‘Magnificent Seven’ neighbour but well worth a visit. In the office a very friendly woman looked up the burial register and confirmed that Fred Williams died in the London Hospital, Whitechapel.

In a further development, just before Christmas 2016, Lisa Bacon contacted us to say she had come across this post. Her Great Uncle was George Layton and she has very kindly allowed us to share his photograph of him. 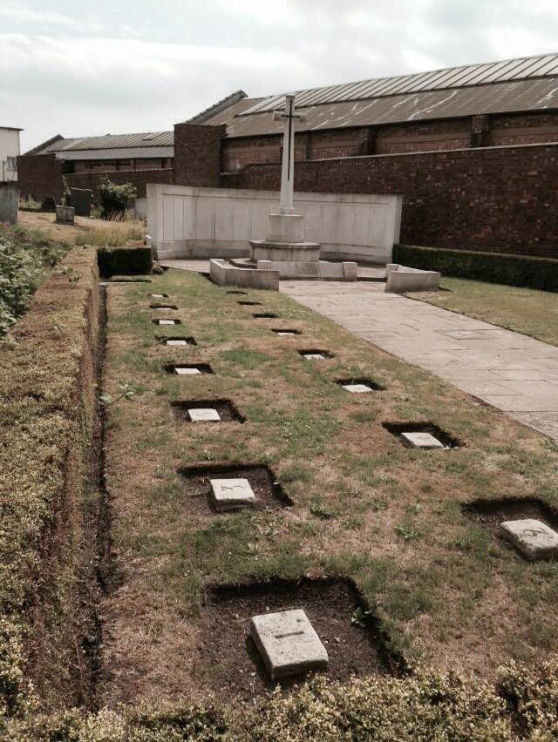 Many thanks to Marion Gower for the research on this story, Ray Armfield for the Harry the Haddock photo and Woking FC for a lovely day out.

A walk among the stone saints and angels: St Mary’s Cemetery, Kensal Green