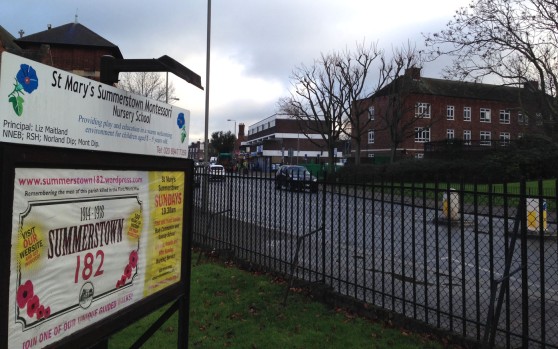 Its the largest war cemetery in the world, named after a Geordie soldier’s observation that the German pill-boxes which once stood there looked like a typical Tyneside working man’s cottage. I went to Tyne Cot in 2010 with my Belgian pals, Bart and Sabien. It had been a glorious day in the Flanders fields, the sun was setting and we had a date with a soldier from Camberwell called Percy Thompson, the great uncle of a work colleague. This was three years before the dawning of the Summerstown182 and if only we’d known, we could have looked out for three others; Eldred Henden, Albert Dell and Joseph Lucas. I might even have thought that those two tall poplar trees reminded me of the twin tower blocks on the Hazelhurst estate. Amongst all the Williams, Georges and Arthurs in the Summerstown182, Eldred’s almost medieval-sounding name is unique. He lived at 27 Wimbledon Road and unlike the great majority of Summerstown182 homes, this address no longer exists. Its a patch of grass on the edge of the estate, opposite the spot where we meet to start our guided walks. A few months ago Janet from Andover, whose Mum lived in the area came to the V2 remembrance and gave us some photos of a stretch of houses which stood here, among them No27. These were bombed in 1940 and demolished in 1969 as part of the redevelopment in the area which saw the tower blocks go up. This little strip curled into Blackshaw Road and contained a fondly remembered fish shop, bakery, off-licence and greengrocers, which have all disappeared forever. The houses a little further down Wimbledon Road opposite the church were replaced by a block of maisonettes which is now home to a laundrette, a charity shop, two convenience stores and Tasty Chicken AKA ‘Carrigans’. 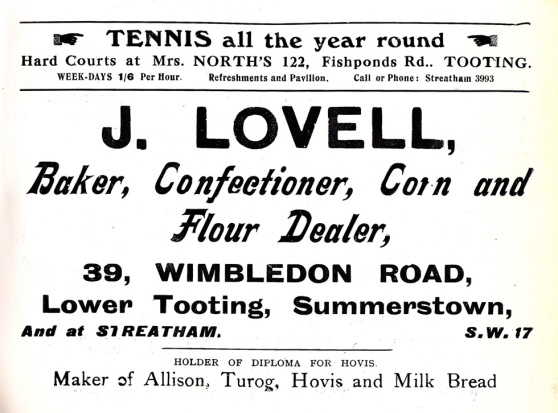 Eldred’s father Henry was from Merton and worked as a labourer in a bone factory. From 1891 he and his wife Alice lived at 17 Wimbledon Road. This address is now a charity shop called African Child. It later became the home of the family of another of the 182, Charles Richmond. Eldred, christened Edward was born in 1896, the youngest of four children. Francis was the oldest and there were two sisters, Florence and Mabel. By 1911 they had moved five doors along to No27. Henry had progressed to be a general shopkeeper of provisions. He probably would have felt quite at home behind the counter of one of the Sri Lankan stores currently next door. Eldred was fifteen and working as a silk printer’s assistant. Textile printing and dyeing, based around the mighty Wandle had been a significant local industry for centuries. Its just possible young Eldred was apprenticed at Liberty’s or the William Morris works at nearby Merton Abbey. He might even have crossed paths with an elderly anarchist called Francis Kitz. Certainly he would probably have known some of his ten children, growing up just round the corner in Hazelhurst Road.

Eldred had an eventful year in 1916. On 8th October he married Grace Ellen Lowe from Smallwood Road in St Mary’s church. Just a few weeks later on 30th October he joined the Labour Corps in Kingston. His profession was listed as a machinist/cleaner. Conscription had finally been enforced earlier in the year and knowing this was on the cards may have hastened the young couple down the aisle. He was aged 20 years and ten months. We don’t know when Eldred joined the 12th Battalion of the Royal Sussex Regiment but assuming he was with them in 1917, he may well have been involved in the fighting at Passchendaele in the second half of that year. It was in this part of Belgium, known as the Ypres Salient that he would be killed in the first month of 1918.

West Sussex Council have digitised the local regimental war diaries and a few clicks reveal that the 12th Battalion were at a place called Westroosebeke, about eight miles north-east of Ypres on 21st January 1918. It was a period of relative calm between Passchendaele and the Spring Offensive and the battalion were in reserve trenches. There were church parades and musketry training, but a grim reality take was a mention that two privates were to be tried for desertion. On the 18th they moved into frontline trenches at Westroosebeke. Over these first weeks of the year there was regular mention of a soldier occasionally being wounded and the odd death. The 21st January was their worst day. The typewriter script coldly states ‘6 O.R.s killed , 2 O.R.s wounded’. No names, no reason, no detail. The next line indicates that the battalion marched on that evening, making their way to Poperinghe. This was 1918 and soldiers were hardened and immune to war. Nonetheless this matter-of-fact mention of the ending of six lives is deeply shocking. Eldred John Henden aged 22 was almost certainly one of them. The following month the battalion were disbanded. There probably weren’t many of them left. 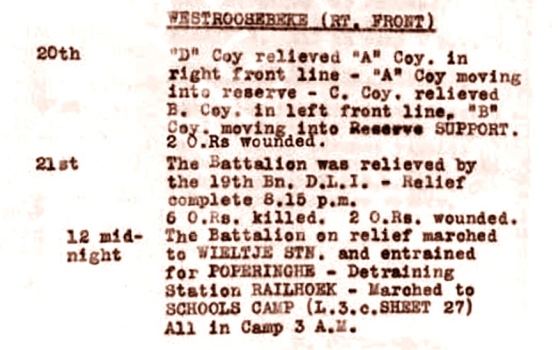 Back in Summerstown, Eldred’s wife Grace was a widow at the age of 22. She married again in March 1919, just over a year after his death, to a William Membry. Mabel Henden was three years older than her brother Eldred and married George Sandys in June 1915. Their second son, Henry, joined the Oxford and Buckinghamshire Light Infantry in the Second World War and was killed on 20th January 1944, aged 24. This was just a day before the anniversary of his Uncle Eldred’s death. The coincidence would not have been lost on Grace, who very sadly died herself the following September at the age of 47. Another sister, Florence had a son called Albert Eldred born in 1909. Eldred would have briefly known his young nephew who lived on until 1999, almost carrying the name Eldred into the twenty-first century.

The research work on Eldred’s family was done by Christine Marden  If any of his relatives are able to contact us, it would be lovely to know more about him. We would welcome them to come on a Summerstown182 walk and see his name on the St Mary’s Church war memorial.