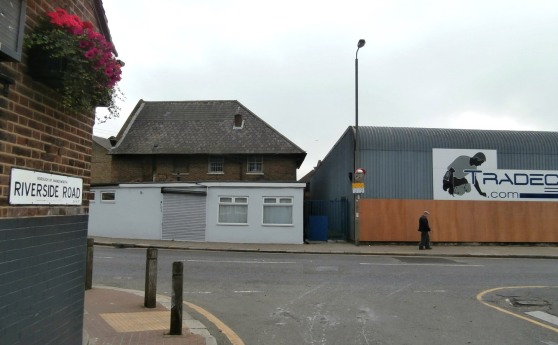 Its a real honour to be asked to give a First World War themed walk around Streatham Cemetery on the Friends’ Open Day. Looking for the Maces in the spring, I spent quite a bit of time in there so any excuse to go back into this oasis of tranquility is most appreciated. Especially at this glorious time of year with beechnuts crackling underfoot and conkers tumbling out of the trees. On a sparkling morning in mid-September, Doug Kitts was keeping a watchful eye on the bee hives, Ted Foster was twinkling in the bright autumnal sunshine and William Mace’s holly bush had burst into berry. It was also an opportunity to familiarise myself with William Albert Nicholls from 7 Summerstown. His house is pictured in the above photo taken in 1955, on the left next to the shop. Now the space is occupied by a carpet warehouse. So many of the Summerstown182 ended up alone in a corner of a foreign field, but William is about half a mile from his home, tucked up cosy with his wife Alice Harriet and an easy visit for any of his nine children. The inscription on his grave sums it up ‘A better husband never lived, a better father never died’. He was 46 and the date of his death, 5th May 1919 seems unusual, six months after the Armistice. William almost certainly got sick or died as a result of an accident. The burial register often gives a clue and a hospital is sometimes mentioned, but not in this case. He may even have died at home. Born in Ware, Hertfordshire in 1873, he was one of ten children of Thomas and Selina Nicholls. They moved to Croydon but in 1886, both of William’s parents were to perish in a terrible accident at a bakery in 157 Abbey Street, Bermondsey, run by his older brother, Thomas. They died of their injuries in Guy’s Hospital and two of William’s sisters, Caroline and Beatrice were seriously hurt jumping from the flames. Under ‘Fatal Fire at Bermondsey’ an account in The Daily News recalls how ‘The occupier and his brother William, a lad of thirteen or fourteen years, made their escape from the first floor back window on to the adjoining house in Gedling Street. Much consternation was created in the neighbourhood’. The effect this tragedy had on the young man is hard to imagine. William worked for a while as a painter then, perhaps in some way to put the disaster out of his mind, he joined the Queens West Surrey Regiment at Guildford in 1890. What followed was a chequered ten year career in the army. Promotion to corporal and the passing of exams was followed by court martial and demotion to the ranks. He saw something of the world though, Malta, South Africa and India. Ferozepore being just one of the places that he passed through, later the resting place of a fellow member of the Summerstown182, Reginald Knight from Squarey Street. His service record indicates that in 1900 William was discharged as ‘medically unfit for further service’. Funnily enough his namesake from Huntspill Street, William Nichols ‘with a single L’ received similar news. Both would be undeterred. Meanwhile William had married Alice Savill in Croydon in 1897. By 1901 they were living in Westminster with two small boys. A few years later, the young family were part of the central London slum clearance scheme to the green spaces of Summerstown. In 1911 William was living with his wife and seven children in four rooms at 7 Summerstown, opposite Bob Sadler’s cottage and next door to what is now the Conservative Club. Very handy for a pint in The Corner Pin. Two more children were born after this, a family of five girls and four boys. He was working as a lift engineer’s labourer but if he thought life was going to get any easier, the shadows were closing in. With his large family, age and previous discharge, William would very likely have avoided military involvement in the First World War. But he joined the Army Service Corps in 1915 and entered France on 30th October 1915, in the aftermath of the terrible Battle of Loos. The 1918 absent voters list shows that his two eldest sons, Thomas and Frederick had also joined up. William was now 42 and probably considered still not in great shape for front-line duty. At some stage he transfered to the Labour Corps under the rank of Corporal. This was the huge group of men tasked with the labouring work required to keep the wheels of a huge army turning. Many of them were from India, China and elsewhere, but others were skilled with picks and shovels or some kind of trade. Then there were those who had been injured or wounded and deemed unlikely to be much use in combat. It was still highly dangerous work and in the German Spring Offensive emergency of 1918, many in the Labour Corps would have rejoined the infantry. When the war finished, one of the tasks assigned them was ‘burying the dead’. Its easy to see how such work could make someone sick or diseased, not to mention the influenza epidemic of the time. A date on his medal card of 8th February 1919 suggests that William Nicholls was perhaps discharged on this date and spent his last few months in England before his death on 5th May 1919. With nine siblings and nine children of his own, there is a very good chance that descendants of William Nicholls are still around. That may even be one of them walking past the carpet place? You never know, stranger things have happened.

Many thanks to Marion Gower who researched this soldier and provided much of the information for this story.