Its a long way to Tipperary from Summerstown, so what on earth was the story behind an elegantly lettered stone plaque on a house at the end of Franche Court Road and its apparent homage to the southern Irish town, famed for its cider orchards? This has been intruiging me for some time. The first house on the right as you enter the street from Garratt Lane, it stands like a sentry, watchful vigilant and protective. The front garden is currently a delightful tangle of multi-coloured roses all vying for attention. It doesn’t appear to have a number and local residents say that they have always just known it as ‘Clonmel’. Another one of the Summerstown182, William John McMullan lived at 30 Keble Street with his father who had the same name. One of these two, or possibly another William McMullan lived for some time at the house with the Clonmel tablet. But that didn’t really help – the Keble Street McMullans were from Co Down, an equally long way from Tipperary. I suspected that Samuel Sidney McMullan was related to William but I coudn’t quite work out how. A very small clue on the Forces War Records database provided an inkling – this stated that Samuel’s town of residence was Clonmel, Co Tipperary. Things were warming up. The connection was finally confirmed when Marion of the Streatham Society pulled the rabbit out of the bag. Samuel’s 1916 marriage certificate. On the 29th of November 1916, Samuel married Mabel Miriam Cole at a Registry Office in Ipswich. He was 25 and gave his occupation as a gunner in the Royal Garrison Artillery, though he also indicated that he worked as a ‘laundry vanman’. He gave his residence as ‘Clonmel’ Franche Court Road. Mabel’s mother Alma was one of the witnesses. The following summer Mabel gave birth to a daughter called Joyce. William Senior was a ‘Laundry Horsekeeper’ and with the enormous Anglo-American Laundry at the end of the road and three others close by, neither McMullan would have had much of a commute. As for Clonmel, it would seem that Samuel was there at some stage and obviously held it in great affection. The fact it is in his service record details suggests a military connection and Clonmel was in fact home to Kickham Barracks, a British Army garrison in Ireland from the time of Cromwell. It was the main training base for soldiers from that corner of Ireland prior to the First World War. Samuel was born in Belfast in 1891 and its just possible that in the midst of the Home Rule crisis with arms flooding into the country and unionists and nationalists preparing for civil war, that an adventurous lad from the north might end up in the army and be stationed there. In any case the war put that particular conflict to one side. William John McMullan was two years younger than Samuel and in the 1911 census record was working as a gardener and living with his father and step family at 30 Keble Street, literally the house directly opposite where I’m sitting. Both father and son were born in Emdale, Co Down, the birthplace of Patrick Bronte. William joined the Middlesex Regiment and was killed at the Somme on 17th September 1916. Samuel was with the Royal Garrison Artillery’s ‘K’ Anti-Aircraft Battery with whom he would have been operating some of the most powerful and destructive guns and howitzers in the British Army’s arsenal. His death near Arras on 11th April 1918 indicates that he was yet another of the Summerstown182 who was swept up in the German Spring Offensive. Just one of 178,000 British and Commonwealth soldiers who were either killed, wounded or went missing in this battle where the German army advanced 40 miles and almost changed the course of the war. With a nine month old child to look after, Mabel returned to Ipswich. Samuel’s Commonwealth War Graves Commission record notes that he was ‘the husband of Mabel Miriam Cole of 72 Rendlesham Road, Ipswich’. For whatever reason, she reverted to her maiden name and the McMullan connection was gone. Their daughter, Joyce Cole married Kenneth Robinson in Ipswich in 1939. If they had any children there is a good chance they would still be alive and might like to know about their Grandfather and his Summerstown-Clonmel connections. Funnily enough there is also an apple connection between the two places. Behind Franche Court Road was an immense orchard and an elderly resident I spoke to recalls munching his way through a stash of them in the Anderson shelter at the bottom of his garden. I invite any grandchildren or other relatives to join us on a walk and hear about this and other stories, and while we’re at it, lets raise a glass of Bulmers to Samuel and William McMullan of the Summerstown182. 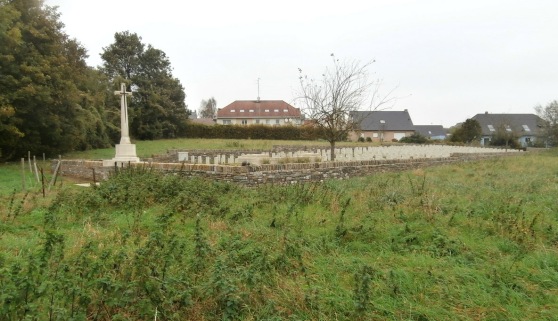 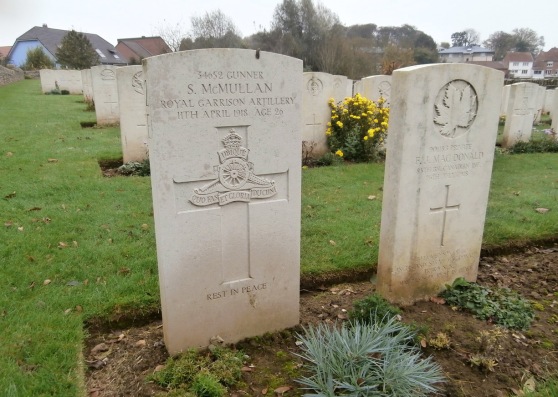 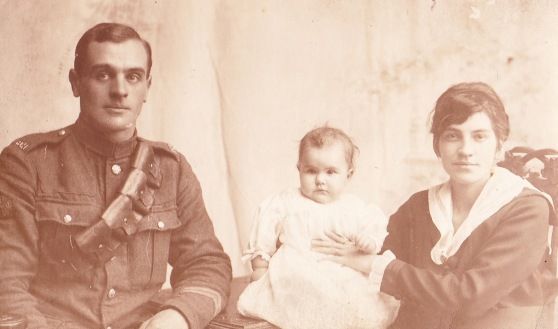 UPDATE: A fantastic postscript to this was that in August 2015 I received an email out of the blue from the great grand daughter of Mabel Cole. She told me that her (great) Auntie Joyce had only passed away a couple of years previously and had been trying to do some research into the father who she never knew just before she died. I was very soon in touch with Joyce’s niece Valerie who sent me the above photograph; Samuel, baby Joyce and Mabel. There are three very similar poses and they were given to her by her Aunt to keep Samuel’s memory alive. For many years the photos remained hidden away as Mabel’s second husband preferred not to have any reminders of her earlier marriage. Valerie recalled that Joyce ‘always had Samuel’s lovely eyes – she was my favourite Auntie’.