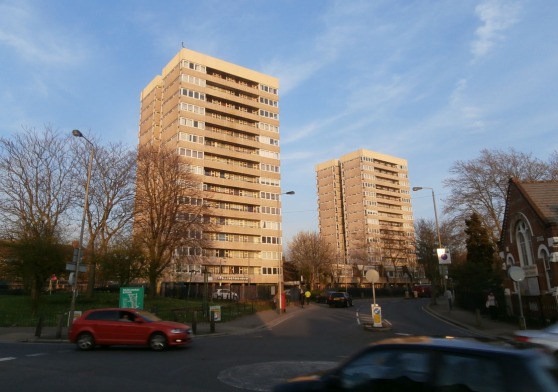 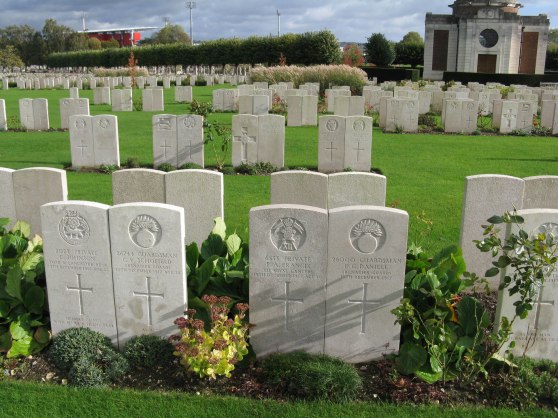 At the northern end of Hazelhurst Road on the western side and roughly where fourteen-storey Chillingford House has sat since 1970, would have been Number 10. Just a few hundred yards from the church, this would have been one of the old houses damaged by the devastating November 1944 V2 rocket attack which killed 33 people and injured 100. Thirty years before then it was home to the Daniell family upon whom the First World War visited a unique and particularly cruel tragedy. Lance Corporal George Nathaniel Daniell of the 167th Army Troops Company, Royal Engineers was killed on 20th July 1917 at Messines Ridge. He was 53 years old. Just five months later on 19th December, his eldest son, Private Francis (Frank) George Daniell, aged 28 of the Grenadier Guards also perished, most likely during fighting at the Battle of Cambrai. He is buried in St Sever Cemetery, Rouen, where he rests alongside William Darvill, a fellow Hazelhurst Road resident. A genealogy website put me in contact with Lawrence Daniell in Winchester who had done all the hard researching work and visited both graves. The records revealed the extraordinary information that George Nathaniel Daniell fought in three wars and still had time to raise seven sons. He was born in Clerkenwell in 1864 and joined the Royal Engineers in 1884, serving for just over four years. This was the age of imperial adventure and the so-called ‘scramble for Africa’ with Britain, Germany and France lining up to press home their influence, sowing some of the seeds which lead to the 1914-18 conflict. When George first took the king’s shilling, the focus was Egypt and the Sudan. The British were desperate to secure the Suez Canal but 1885 saw General Gordon’s relief mission to Khartoum end in disaster on 26th January. Gordon became Victorian England’s most notable colonial martyr and the public outcry over his death lead to the fall of Prime Minister Gladstone. If you’ve never seen it, try watching the 1966 film with Charlton Heston and Lawrence Olivier in the lead roles. The fundamentalist Sudanese rebel leader responsible, Muhammad Ahmad al-Mahdi, popularly demonised as the ‘Mad Mahdi’ now threatened Egypt and George Nathaniel Daniell donned his scarlet tunic and saw action against him at Suakin on the Red Sea. His records indicate that he arrived here on 14th March 1885. For this service, The Khedive of Egypt awarded a bronze star medal to his British defenders. George emerged unscathed from his first African adventure but will have known later why Khartoum Road, just a few streets from where he made his home in Summerstown, or Klea Avenue in Balham was named. Upon enlisting he gave his trade as a ‘brass furnisher’ but by the end of his service he had ‘engine driving’ and ‘electrical instrument repairing’ skills, clearly showing his technical development. In 1889 he married Annie Maria Chorley and by the time of the 1891 census they were living in Islington with one year old Frank. His profession was now ‘metal worker and turner’. It appears that he rejoined the Royal Engineers shortly after but left again in 1896. Whether he was back in action against Mahdist forces in 1898 with General Kitchener is unclear. By 1901 the family were in Summerstown and living at 4 Hazelhurst Terrace with five sons. There was no sign of George, he was off to another war. His service records show him as leaving for South Africa on 19th January, ready to take on the Boers. There are no further details of what happpened there but by 1911 the family were at number ten, Hazelhurst Road with two more boys. George Nathaniel was missing again but this time in the safer environs of Berkshire, working away from home as an electrician. Frank like his younger brother George worked as a sign-writer. The house was almost directly opposite the home of another of the Summerstown182, Horatio Nelson Smith, the sixteen year old who was killed at the Somme. Come the First World War, and just when he might have thought his fighting days were over, the extraordinary George Nathaniel Daniell was ready for one more tilt at the enemy. On 27th June 1915 at Putney he rejoined the Royal Engineers giving his age as 45. In fact he was 51. 45 was the upper age limit for men with previous military service but a desperate need for manpower after huge losses at Loos and Gallipoli meant that he was unlikely to be turned away. His attestation form states that he had 17 years previous service in the Royal Engineers. Frank (Francis George) and his younger brother Stanley, who was 15 when war broke out joined the 2nd Battalion of the Grenadier Guards. They must have signed up together as Frank’s distinctive service number was 26000 and Stanley’s 26001. The St Mary’s parish magazine of February 1918 sadly states that ‘Frank Daniell who was wounded on December 1st, died in hospital on December 12th’. The June issue mentions Stanley Daniell as having been wounded. Three other brothers also served in the army and along with Stanley survived the war. Cecil Henry Daniell was an electrician like his Dad and followed him into the Royal Engineers, Edgar Douglas Daniell joined up in 1915 with the 17th Lancers and George Sidney was also in the Royal Engineers and suffered a serious knee injury at Neuve Chapelle. This perhaps saved his life but can’t have helped him in his sign-writing career. Ernest and Reginald were only 12 and 10 when war broke out. Many thanks to Lawrence for being so generous in sharing his photos and research. It would be very good now to try and find a photograph of Frank or his father, the intrepid imperial warrior who took on the Mahdi, the Boers and the Kaiser and if any Daniell descendants are out there and can help, please do get in touch with us.